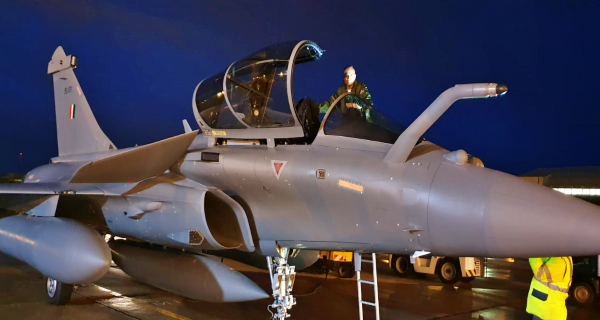 The second set of 3 Rafale planes reached Jamnagar in Gujarat in early November, after which they reached their home base Ambala. The first set of five Rafale aircraft reached Ambala airbase on 29 July. These five aircraft were later formally inducted into the Indian Air Force, Defense Minister Rajnath Singh also participated in the program. The defense minister was accompanied by French Defense Minister Florence, Chief of Defense Staff Bipin Rawat, and Air Force Chief RKS Bhadauria.

Rafael aircraft are the first jet aircraft to be inducted into the Indian Air Force after 23 years after the Russian-made Sukhoi-30 MKI joined the army in June 1997. These Rafale aircraft have been purchased from France. Rafale is a two-engine medium multi-role combat aircraft (MMRCA) manufactured by French company Dassault Aviation. Rafale fighter jets have been kept as ‘Omnirol’ planes, which are capable of playing an important role in the war. Rafael aircraft can do all these tasks – such as air supremacy, air raid, ground support, heavy attack and nuclear deterrence.

Rafale was not India’s only option. Many international aircraft manufacturers offered from the Indian Air Force. Later six big airline companies were shortlisted. These included Lockhead Martin’s F-16, Boeing F / A-18S, Eurofighter Typhoon, Russia’s MiG-35, Saab’s Gripen and Rafale from Sweden. The Indian Air Force shortlisted the Eurofighter and Rafael on the basis of testing and pricing of all the aircraft. Dallas won the contract to provide 126 fighters, as it was the cheapest available. It was said that its maintenance is also easy.

In April 2015, Prime Minister Narendra Modi visited Paris. Then it was decided to buy 36 Rafale. Later, the NDA government signed the deal in the year 2016. When French President Francois Hollande visited India in January, a $ 7.8 billion deal for the purchase of Rafale jets was signed.

02/02/2021
Noida: Noida Authority will start helicopter service for two big airports (airports) and about 36 cities in the country by 2021 this year. Bell...

28/09/2020
Mumbai: A world-class government music college will be set up here in the name of renowned musician the late Deenanath Mangeshkar, Maharashtra Minister Uday...

05/08/2020
New Delhi: Techo Electra has brought a new electric scooter. The company has introduced it under the name Techo Electra Saathi. It is a...

29/06/2020
London: The 20-member team of Pakistan has reached England tour on Sunday afternoon. Now she will remain in quarantine for 14 days. The Pakistan...