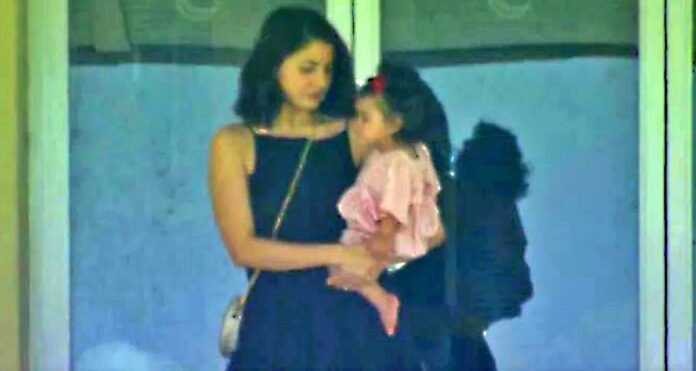 New Delhi: Even today people are desperate to see Vamika Kohli, daughter of former India captain Virat Kohli and Bollywood star Anushka Sharma. In such a situation, the big news has come out for those who have a glimpse of Vamika. The third ODI match is being played between India and South Africa (Ind vs SA 3rd ODI). In such a situation, Virat Kohli’s daughter Vamika got to see on the TV screen during the bowling of Team India.

Virat Kohli’s wife and Bollywood star Anushka Sharma were standing in the stands with her daughter Vamika. At that time the camera went towards them, where Vamika was spotted. During that time Vamika was in the lap of her mother Anushka. Vamika Kohli was wearing a pink dress, in which she was looking very cute. Let us tell you that this is the first time that Virat Kohli’s daughter has got a glimpse of Vamika.

This picture of Wamika Kohli is becoming increasingly viral on social media. It is to be known that till now not a single picture of Vamika had gone viral on social media. In such a situation, when his picture went viral during the match, people are now sharing it fiercely. People are also commenting on Vamika’s picture. However, seeing Vamika’s cuteness, everyone is praising her.

Let us tell you that Virat Kohli and Anushka Sharma had appealed from the very beginning that they want to keep their daughter away from the world of social media right now. For this reason, the couple had not yet shared the picture of their daughter. The couple had said that they will keep their daughter away from social media till she starts understanding these things. At the same time, recently, Wamika Kohli turned 1 year old on 11 January. During this Virat Kohli was playing test series against South Africa.

21/10/2020/10:34:pm
New Delhi: Onion prices have been rising even after the decline in demand during Navratri. At present, the wholesale price of onion in Maharashtra's...

Changes made in central motor vehicle rules, now tractors will be able to run...

21/05/2021/9:21:pm
New Delhi: The Ministry of Road Transport and Highways has notified amendments in the Central Motor Vehicles Rules to promote Clean Fuel in rural...

Disillusioned with politics, Rajinikanth broke the party, said – I will not fight elections

12/07/2021/9:21:pm
Chennai: Actor Rajinikanth on Monday announced that he is disbanding Rajini Makkal Mandram which was formed to mark his entry into politics and said...

New song Tabahi of actress Tamannaah Bhatia and Badshah is being...