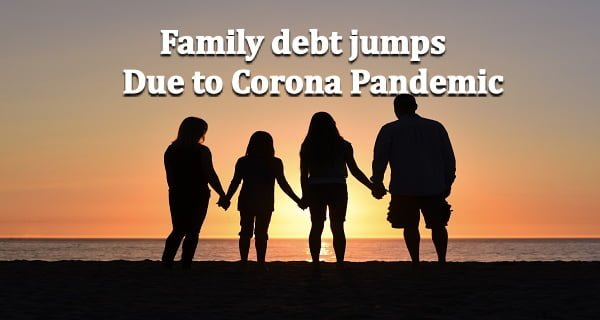 Mumbai: The Corona Pandemic has had an adverse effect on the income and economic condition of the people. Due to this the debt has increased at the household level and it has reached 37.3 percent of GDP (Gross Domestic Product) in the financial year 2020-21 from 32.5 percent in the previous financial year 2019-20.

In a report by SBI Research, it has been said that this debt ratio may increase further in the current financial year due to the second wave of the epidemic. In fact, the level of household debt has been increasing since the implementation of GST in July 2017. Earlier, demonetization was implemented in November 2016.

Soumya Kanti Ghosh, Group Chief Economic Adviser at State Bank of India (SBI), said that the reduction in bank deposits in the financial year 2020-21 and on the other hand increased health expenditure, on the other hand, the family debt as a ratio of GDP in 2021-22 and may increase. The report said that although the family debt to GDP ratio in India is low as compared to other countries, we need to increase income to supplement salary income.

If we look at other countries, it is 103.8 percent in Korea, 90 percent in Britain, 79.5 percent in America, 65.3 percent in Japan, 61.7 percent in China. Whereas Mexico has the lowest at 17.4 percent. However, he said that despite the debt as a ratio of GDP being more than 37 percent, it is less than other countries.

Last year, people’s deposits in all commercial banks increased in the initial lockdown. This was because the scope for spending was limited. However, it declined marginally during the festive months. Deposits decreased by Rs 1.06 lakh crore in 112 districts during the first wave of the COVID pandemic (March-December 2020). This came to the fore from the information given about the trend of deposits by banks for 711 districts of different states and union territories.

However, from March 2021 this year, deposits in 62 districts have come down by only Rs 38,295 crore. This suggests a revival in economic activity despite the second wave. The beginning of the second wave saw a massive withdrawal of deposits from banks. However, this trend has now subsided. From March to December last year, deposits increased by Rs 11,19,776 crore in 599 districts while there was a decrease of Rs 1,06,798 crore in 113 districts.

Rising debt on the family means that their financial savings rate has decreased due to increased consumption and health expenditure. According to the report, due to a reduction in bank deposits and medical and other health-related expenses, the debt on the family to GDP ratio may increase further in 2021-22.

Remadecivir approved by the FDA as the first drug to treat Covid-19 in the...

23/10/2020/8:48:pm
Washington: The Food and Drug Administration in the United States on Thursday approved the antiviral drug Remdesivir as the first drug to treat Covid-19....

Joe Biden promised, “If we win the election, the American people will get the...

25/10/2020/5:05:pm
Washington: Joe Biden, the Democratic Party's presidential candidate in the United States, has said that if he is elected in the November 3 election,...

Pappu Yadav said – We will make Bihar as developed as Japan.

18/08/2020/9:49:am
Patna: National President of Jan Adhikar Party (Democratic) and former MP Pappu Yadav has said that if his government is formed in the state...

31/07/2020/10:07:pm
New Delhi: The Supreme Court on Friday said that the newly formed Board of Directors of Unitech Ltd can share the plan of resolution...

07/02/2021/10:36:pm
With more than 63 million installations, messenger app Telegram becomes the most downloaded non-gaming app for the month of January 2021, beating the number...