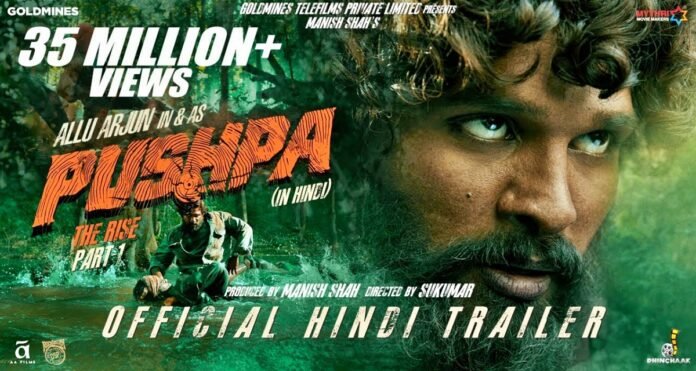 Allu Arjun and Rashmika Mandanna starrer film ‘Pushpa: The Rise’ Hindi-speaking lovers were waiting for a long time. Directed by Sukumar, this film is originally made in Telugu. But seeing the tremendous love of the people, it was dubbed in Malayalam, Tamil, Kannada, and Hindi languages. The film got a tremendous response in the South and hence the fans were waiting for the film in Hindi for a long time. But now the wait of the fans is over.

The movie was released on amazon prime video
‘Pushpa: The Rise’ has been released in Hindi on OTT. The film was released on Amazon Prime Video at 12 pm on Friday night. The caption of the film was given This is not a film. Amazon Prime Video shared a post on social media late in the night and informed that the film has arrived. Fans are praising Allu Arjun a lot after watching the film.

The item number is making a splash
Considering the popularity of Megastar Allu Arjun, this is the biggest debut of any regional language film in the Hindi market. The film was released in theaters on December 17, 2021. Rashmika Mandanna and Fahadh Faasil are in the lead role with Allu Arjun. Apart from this, Samantha is in a special appearance. His item number is making a splash.

Pushpa has done business of 326 crores
Having established its roots in Telugu, ‘Pushpa: The Rise’ has made its mark in every nook and corner of the country. The film, which was released on December 17, has done tremendous business at the box office. The Hindi version of the film alone has earned more than 81 crores. At the same time, if we talk about its worldwide collection, then the film has done a business of more than 326 crores. After the success of the film, Rashmika is now entering Bollywood as well, she will be seen in ‘Mission Majnu’ with Sidharth Malhotra.

24/08/2021/8:42:pm
Kabul: The Taliban have asked the US to stop evacuating professional Afghans. The news agency AFP gave this information on Tuesday, quoting the spokesman...

Central government told the Supreme Court – for the EWS quota, income limit of...

02/01/2022/9:04:pm
New Delhi: The Central Government has informed the Supreme Court that it has fixed the family income limit of Rs 8 lakh per annum...

Rescue & relief measures on at flood-hit areas of Assam

17/07/2020/10:11:pm
Gauhati: In Assam, rescue and relief measures are on at flood-hit areas though the situation is slightly improved. Talking to AIR News, Public Health...