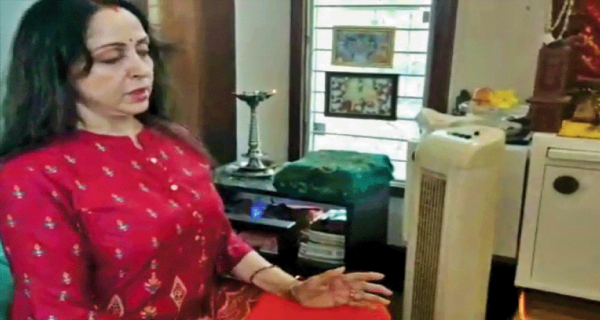 New Delhi: Where the dispute between Ayurveda and Allopathy after a sharp statement by yoga guru Baba Ramdev a few days ago still did not stop. At the same time, Hema Malini, BJP MP from Mathura, Uttar Pradesh, has also come in the discussion regarding the rescue from Corona. Yes, in fact, Hema has claimed that if there is a daily Havan in the house, then people can also avoid coronavirus and other diseases. Now, this statement of MP Hema has created a huge stir on social media.

Sitting on the sofa, Hema’s Havan:
In fact, on the occasion of World Environment Day, a video of Hema has surfaced in which she is seen sitting on the sofa and performing Havan with great devotion. Regarding this video, MP Hema Malini says, “Ever since Corona came, I do Havan every day, doing Havan daily also purifies the environment.” Now, this video was to come out that Twitter users started taunting Hema Malini and started her class. Some media channels have also shared this video.

‘As long as there is the corona, do Havan everyday’
In this video, Hema Malini said, “Since ancient times, the practice of performing Havan in India has been considered beneficial and the right way to purify negative forces. Today the whole world is facing an epidemic and environmental crisis, in such a situation, not only on Environment Day but till this epidemic ends, all of you should perform Havan every day.

How did people make sharp taunts?:
Now on this video of Hema’s Havan, people started taunting her. Where someone wrote “It is a good thing to do Havan, but we should not fall into superstition in such a dangerous disease. Because if people could avoid performing Havan, then thousands of saints who lost their lives in Corona would not die like this. If the Havan could be avoided, the President would not have gone to AIIMS if he had corona. At the same time, another user wrote that “the people of Mathura did not serve him, but everyone had made him an MP to perform Havan. They get 5 lakhs per month only for performing havan. How the people of Mathura have chosen. Tell me, is the public stupid or not?

WHO approves emergency use of corona vaccine

01/01/2021/10:14:am
Geneva: The World Health Organization (WHO) has approved the emergency use of Pfizer / BioNTech Vaccine to prevent coronavirus and now these countries will...