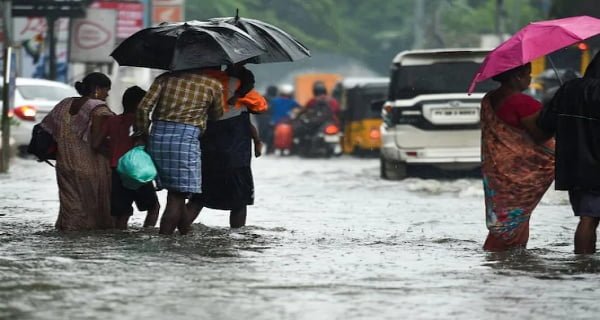 New Delhi: Rain Alert continued to wreak havoc in the states of South India on Saturday as well. Andhra Pradesh was the most affected among these states. The maximum loss of life and property has occurred in the rain-related incidents in Andhra Pradesh. At the same time, on behalf of the weather monitoring organization Skymet Weather, there is a possibility of rain in most of the states of South India on Sunday. At the same time, governments in Tamil Nadu, Karnataka, Kerala, and Andhra Pradesh have issued many important instructions for rescue work.

According to Skymet Weather, there is a possibility of light to moderate rain in most parts of Tamil Nadu, Karnataka, and Rayalaseema on Sunday. The organization says that on Sunday, moderate rain may occur over Kerala, Tamil Nadu, Andaman and Nicobar Islands, Coastal Andhra Pradesh, South Chhattisgarh, Konkan, Goa, South Central Maharashtra, Marathwada, and Telangana. Along with this, there is a possibility of rain in some parts of Odisha, Lakshadweep, Madhya Pradesh, and some parts of Gujarat.

28 killed, more than 17 missing due to heavy rain
On the other hand, there has been a reduction in rainfall in Kerala’s Sabarimala, where the Pathanamthitta district administration lifted the ban on pilgrimage due to rain, while heavy rains and floods affected life in many parts of Tamil Nadu and Puducherry. On the other hand, at least 25 people have died due to rain in the Cuddapah and Anantapuramu districts of Andhra Pradesh since Friday, while more than 17 people are reported missing in rain-caused incidents.

A member of the State Disaster Response Force has also died. Over 30 people were washed away in the floods in the Cheyeru river in the Cuddapah district on Friday, official sources said. The situation in Tirupati city is still dire and many areas are submerged, while the situation in Tirumala hills is relatively fine, but the rains caused inconvenience to the devotees.

At least five people, including two children, were killed when an under-construction house collapsed amid torrential rains in Kadiri town of Anantapuramu district. Four people were rescued from the rubble but some more people are feared trapped. Chief Minister YS Jaganmohan Reddy conducted an aerial survey to assess the damage in Cuddapah, Ananthapuramu, and Chittoor districts. He spoke to the District Magistrates of Cuddapah and Chittoor and inquired about the damage. The Chief Minister has asked the officials to assess the damage to the crops as soon as the flood water recedes.

SPS Nellore district has also been hit hard, where several villages were submerged on Saturday due to floods in the Pennar river. Official sources said thousands of people have been shifted to relief camps in the SPS Nellore district. Teams of the National Disaster Response Force (NDRF) and State Disaster Response Force (SDRF) have been deployed for rescue and relief operations in the districts.

Villupuram and Cuddalore districts in Tamil Nadu are affected as the Thenpennai river is in spate. Around 15,000 people from both the districts have been kept in relief camps while 18,500 hectares of fields in Villupuram have been inundated due to the Thepenai river in spate.

Revenue and Disaster Management Minister KKSSR Ramachandran said that three people have died in Krishnagiri and Tiruvannamalai districts in the last 24 hours. He told that 368 cattle have also been killed. The Kosasthalai river in Tiruvallur is in spate, causing floods in Manali near Chennai. Chief Minister MK Stalin visited the affected areas and directed the officials to expedite the relief work.

Heavy rains in Kerala affected many parts of the Pathanamthitta district and threatened the Sabarimala pilgrimage on Friday night, but pilgrims were allowed to go in batches again on Saturday. After the water level in Pamba Dam increased, the officials opened two of its doors. Temple officials said on Saturday that since it was not raining heavily, the situation returned to normal in Sabarimala today. The authorities have appealed to the people living on the banks of the river, Sabarimala devotees, and the general public to take necessary precautions in view of the opening of two doors of the Pamba dam.

31/07/2020/10:07:pm
New Delhi: The Supreme Court on Friday said that the newly formed Board of Directors of Unitech Ltd can share the plan of resolution...

03/09/2021/10:05:pm
Mumbai: The last rites of Bigg Boss 13 winner and Bollywood actor Siddharth Shukla were performed on Friday at the Oshiwara crematorium in Mumbai....