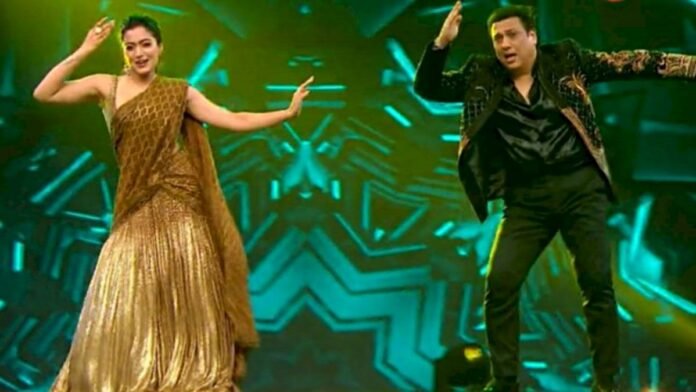 The grand finale of ‘Dance India Dance Super Mom 3’ (DID Super Moms 3) was very spectacular. Contestant Varsha Bumra, who hails from Haryana, became the winner of the show. He also got Rs 7.5 lakh along with the trophy. Varsha is a daily wage laborer by profession and she does building construction work with her husband. The lead cast of the film ‘Good Bye’, Neena Gupta and Rashmika Mandanna arrived as guests on the show. Both had a lot of fun in the show and also promoted the film. The bonding of Neena and Rashmika was also seen in the show.

Not only this, Rashmika Mandanna and Govinda robbed the entire limelight of the show, when both danced on ‘Pushpa’ Song’s Sami Sami. The dancing chemistry between the two was also amazing. The judges present in the show Remo D’Souza, Urmila Matondkar, Bhagyashree, and the audience also started cheering. The audience also appeared very happy seeing the dance of both.

Govinda is considered to be the best dancer in Bollywood. He danced step by step with Rashmika. Rashmika was also impressed with Govinda’s dance skills. Rashmika looked beautiful as ever in a golden ethnic outfit. At the same time, Govinda appeared handsome in an all-black look. Makers have also shared its promo video.

Govinda-Rashmika’s dance audience was happy
In the promo video, we can hear and see the echo of the audience. Remo D’Souza and Bhagyashree also applaud the performance of Govinda and Rashmika. Makers have shared another video. In this, Neena Gupta and Rashmika ask the show’s supermom contestants to come on stage and hug their children.

Russia Warns: Embargo On Oil Imports Will Impact Everyone

21/03/2022/8:42:pm
Moscow: An embargo on Russian oil imports, pushed for by some European countries over Moscow’s military action in Ukraine, would have a direct impact...

Google Play Store removed these 15 apps, if you have downloaded then delete them...

Countries where tap water comes in the best quality

14/12/2021/9:10:pm
Washington: There is a great danger looming over Antarctica's doomsday glacier, the source of unfathomable water on Earth. Its Thwaites Glacier - A long...

Saif Ali Khan will be seen as Lankesh in Prabhas ‘Adipurush’and...