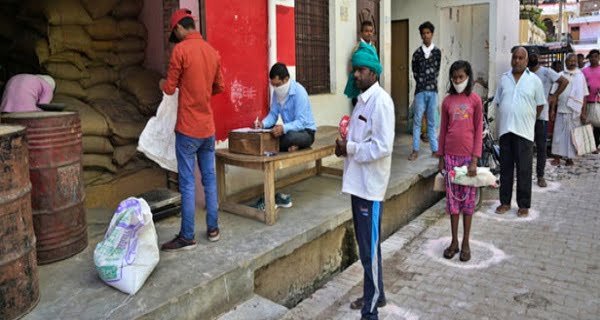 New Delhi: In view of the crisis caused by the second wave of Corona Virus in the country, the Indian Government has taken a big decision on Friday. Under which about 80 crore people of the country will be given free ration under Pradhan Mantri Garib Kalyan Anna Yojana for the next two months. This information was given by Food and Public Distribution Secretary Sudhanshu Pandey.

Secretary Pandey said, “The way grain was distributed free of cost at the time of lockdown last year. Similarly, this year also, the Central Government will give five kilograms of grains per person for free in the months of May and June. ”

He said, “The scheme to be given under the PDS scheme will cost about 26 thousand crore rupees. About 80 crore people will benefit from this food grains given under the Pradhan Mantri Garib Kalyan Anna Yojana. ”

Officials said, “Prime Minister Modi emphasizes that when the country is facing the second wave of corona virus epidemic, it is necessary that the poor get nutritional support.”

28/09/2020
Washington: Presidential Debate on September 29 will be the first official presidential debate between US President Donald Trump and Democratic Party rival Joe Biden....

05/12/2020
Mumbai: Announcing a favorable move to promote digital payments in the country, the Reserve Bank on Friday said that the RTGS system used for...

05/11/2020
Washington: Here the election was held, here Trump gave a hasty speech (Trump Speech), which became a riddle. To solve it, one needs to...