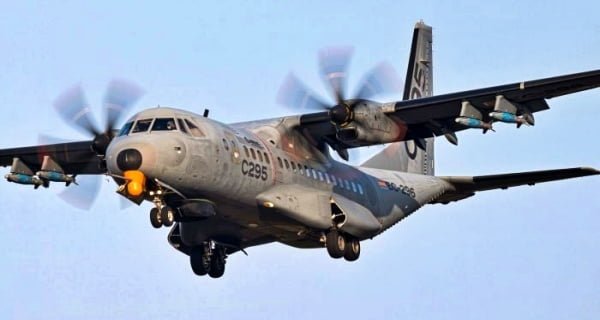 New Delhi: The Defense Ministry on Friday signed a contract worth around Rs 20,000 crore with Spain’s Airbus Defense and Space for the purchase of 56 ‘C-295’ transport aircraft. These aircraft will replace the Avro-748 aircraft of the Indian Air Force. Officials said this is the first project of its kind in which a private company will manufacture military aircraft in India.

Under the deal, Airbus will deliver 16 aircraft capable of defense and space flight within 48 months of the signing of the contract. The remaining 40 aircraft will be manufactured in India. These will be manufactured within 10 years of the signing of the contract by a consortium of Airbus Fidelity and Space and Tata Advanced Systems Limited (TASL).

Tata Trusts Chairman Ratan Tata congratulated Airbus Defence, Tata Advanced Systems Ltd, and the Ministry of Defense on the signing of the contract, saying it is a “major step” towards launching aviation and aeronautical projects in India.

In a signed statement posted on Twitter, he said this would create an in-house supply chain capability at international standards that have never been done before. “The C-295 is a multi-role aircraft designed to meet mission requirements,” he said. There are many features to do. It envisages total manufacturing of aircraft in India.”

“The Tata Group congratulates Airbus and the Indian Ministry of Defense for this courageous move to manufacturing modern aircraft in India in collaboration with Make-in-India in strengthening the country’s equity framework,” Tata said.

A cabinet committee on security led by the prime minister had cleared the long-stagnant deal two weeks ago. Airbus said the first 16 aircraft will be delivered four years after the contract comes into force and all aircraft will be equipped with indigenous electronic warfare systems. “This contract will drive the growth of India’s aerospace ecosystem, drive investment and create 15,000 skilled direct jobs and 10,000 indirect positions over the next 10 years,” said Michael Schulhorn, chief executive officer of Airbus Defense & Space.

Airbus said in a statement that ‘Make in India’ is central to its strategy in India and the company continues to enhance the country’s contribution to the global product range. Under the C295 program, Airbus is developing a world-class aircraft manufacturing and repair service in India with its industrial partners including Tata and major defense public sector units such as Bharat Electronics Ltd and Bharat Dynamics Ltd, it said.

It said that the C295, which has the capability to take off from small airstrips, is used to transport 71 soldiers or 50 paratroopers. This aircraft can be used to transport people in need of medical treatment. The aircraft is capable of carrying out disaster response and maritime patrol as well as special operations.

14/01/2021/9:51:pm
Dhaka: A fire broke out in a large Rohingya Refugee Camp in southern Bangladesh on Thursday, in which hundreds of houses were destroyed. Officials...