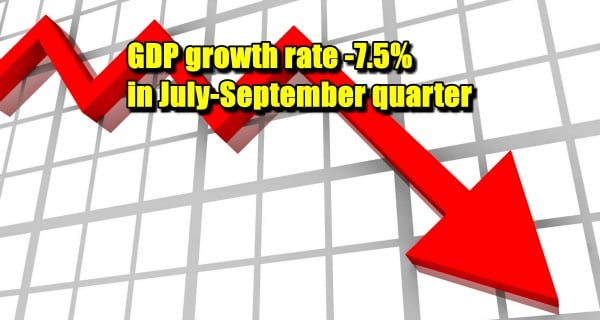 New Delhi: The Central Government has released the data for the second quarter of the current financial year 2020-21 (FY 2020-21) i.e. July-September quarter. In the second quarter, the country’s GDP has been -7.5 percent. However, these figures are much better than the April-May-June quarter. But for two consecutive quarters, negative growth is technically considered a recession. On Friday evening, the government released GDP figures. Significantly, for the first time in the last 40 years, the GDP has come down so much that all eyes were on the data.

GDP decline for two consecutive quarters – Even though the decline in GDP is less than the previous quarter, the country has gone through a technical recession in the first half of the current financial year due to two consecutive quarters of GDP decline. That is, the government has officially accepted the recession. However, rating agencies around the world, including the Reserve Bank of India (RBI) governor, believe that India’s growth rate will improve in the time to come. If we talk about the first quarter, the gross domestic product (GDP) had a historic decline of 23.9 percent.

Take a look at GDP figures – GDP figures for the second quarter of the current fiscal year were -7.5% while rating agencies estimated these figures to be -8.9%. GVP figures for the second quarter were -7%, while these figures were estimated to be -8.6. Agri sector growth was estimated at 3.4%, while Agri sector growth was estimated at 3.9%. The second-quarter figures are much better in this regard. This suggests that this figure is expected to be positive in the next financial year.

GDP shows the level of economic activity and shows which sectors have caused it to rise or fall. It shows how good or bad the economy has performed throughout the year. If the GDP data shows sluggishness, it means that the country’s economy is slowing down and the country has not produced enough goods as compared to the previous year and the service sector has also declined.

Global research and broking house Goldman Sachs In the calendar year 2021, India’s GDP can grow at a rate of 10 percent (GDP growth). Explain that it is one of the major economies in the world. Following the news of vaccines from Pfizer and BioNTech, research companies estimate that all the world’s economies, including India, could accelerate. Meanwhile, in 2022, this growth could be around 7.3 percent.

Analysts at Goldman Sachs expect the Indian economy to pick up once the vaccine arrives. The research company said that next year will see a ‘V (vaccine) -shaped’ recovery in the economy. Meanwhile, India’s GDP growth rate for the calendar year 2022 is projected at 7.3 percent, again the highest among the 11 largest economies in the world.

11/05/2021/8:29:pm
Devprayag: In Devprayag on Tuesday, due to cloudburst many buildings sunk in the waterslide. Municipal multipurpose buildings and ITI buildings were demolished. 8 shops...

02/06/2021/10:56:am
New Delhi: Efforts have intensified to bring India's fugitive businessman Mehul Choksi back to the country. Under this, a hearing will be held in...