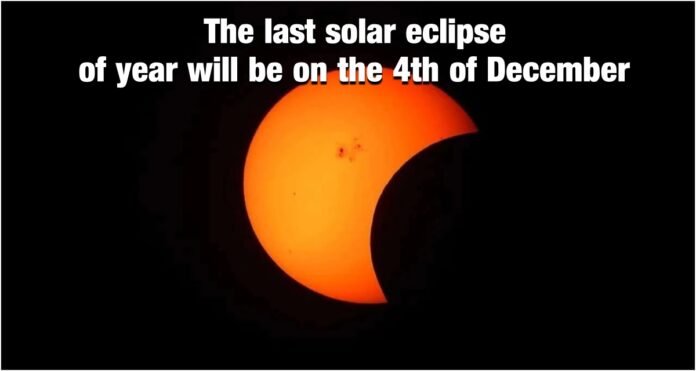 The last solar eclipse of the year is going to happen in the last month of 2021. There will be a solar eclipse on Saturday, December 04. According to the Hindu calendar, this eclipse will take place on the new moon day of the month of Margashirsha. This will be the second eclipse in a span of 15 days. Before this, on November 19, the last lunar eclipse of the year took place on the date of Kartik Purnima. This solar eclipse cannot be seen in India. The festival of Shani Amavasya will also be celebrated on this day. It is believed that whenever the Amavasya date falls on Saturday, it is called Shani Amavasya. Let’s know everything about the solar eclipse on 4th December…

Donate
Donating will be very auspicious due to the solar eclipse and Shani Amavasya happening on the same day. On this day a resolution should be taken to donate according to the reverence. Then the needy people should be donated. By donating oil, footwear, wooden bed, umbrella, black clothes, and urad dal on this day, Shani dosha present in the horoscope ends. Those who are going through the half-century of Shani should donate mustard oil after seeing their shadow. Put a black horseshoe on the door and feed the dog with bread and in the evening light an oil lamp in the west side while reciting the mantra ‘Om Shanishcharaya Namah’, it is beneficial to do circumambulation.

Aries: This eclipse is not auspicious for Aries. There may be a decline in health after the eclipse. There is a possibility of accidents etc., so there is a need to be alert.

Taurus: This eclipse will be auspicious for Taurus. Prestige will increase in the political and social fields. There will be new contracts in business.

Gemini: This eclipse will be auspicious, you will get rid of any old dispute. There are signs of the fulfillment of wishes.

Cancer: This eclipse is not auspicious. Unnecessary arguments can happen with friends, tension will remain from the side of children.

Leo: This eclipse is giving signs of auspiciousness and monetary gains. The problem related to land and building will be solved.

Virgo: The effect of the solar eclipse is auspicious for this zodiac. Courage and might will increase. You will get the support of friends.

Libra: There will be an inauspicious effect for Libra. Control your speech and avoid arguments, there may be a decline in health.

Scorpio: Solar eclipse will remain in this zodiac, due to which the mind can remain disturbed. Some tension is possible after this eclipse, which may cause discomfort in the work area.

Sagittarius: This eclipse will be beneficial for the people of Sagittarius. That is, expenses can increase after this eclipse. There will be unnecessary running around, there are chances of traveling abroad too.

Capricorn: The effect of the solar eclipse will be auspicious. There will be progress in business, while there are signs of promotion for employed people.

Aquarius: There will be wealth along with prestige in society. The problem related to the land building will be solved.

Pisces: The effect of the solar eclipse will be inauspicious. There will be disinterest in spiritual work. There will be chances of transfer in the job. There can be an unreasonable argument with the father, so be careful.

Now Direct flights from Indore, for Pune and Chandigarh, will start from March 28

25/03/2021/9:59:am
Indore: Three new flights will start from Indore Airport to Pune, Chandigarh, and Mumbai from March 28. Travelers will benefit greatly by starting direct...

Virat Kohli left the captaincy on whose words? know the whole matter

23/09/2021/8:20:pm
Many things are now coming to the fore about Team India's handsome captain Virat Kohli's announcement to leave the captaincy of the T20 team...