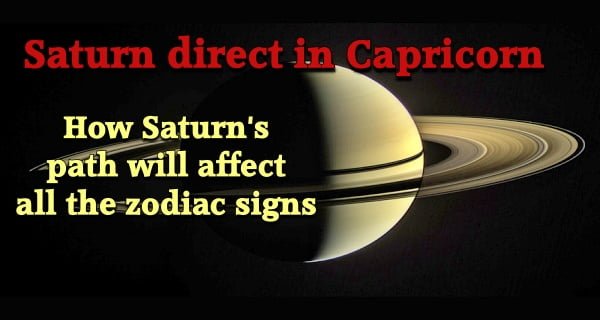 Shani Dev(Saturn) is transiting in Capricorn. The special thing is that Dev Guru Brihaspati( Jupiter) is also placed in Capricorn along with Saturn. The path of Saturn is special for the people from Aries to Pisces. That is, the effect of Saturn being direct is going to affect all the 12 zodiac signs.

According to the Panchang, Saturn was retrograded on 23 May 2021. On this day Ekadashi date of Shukla Paksha of Vaishakh month. This Ekadashi date is also called Mohini Ekadashi. On October 11, Saturn is transiting from retrograde. On this day, the sixth date of Shukla Paksha of Ashwin month. At present, the festival of Navratri is going on. This day is the sixth day of Navratri. Maa Katyayani is worshiped on the sixth day of Navratri. According to the legend, Mother Katyayani killed Mahishasura, Shumbh, and Nishumbh and freed the nine planets from their captivity. Lord Rama and Shri Krishna also worshiped Maa Katyayani. Shani Dev has changed his move on the auspicious date. Therefore, this change will have a special effect on some zodiac signs.

Astrological analysis of how Saturn’s path will affect all the zodiac signs throughout the year.

Aries
Shani Dev(Saturn), who is transiting in the tenth karmic house from the zodiac, will prove to be auspicious for you. All efforts made in the direction of employment will prove fruitful. During this period, the awaited works in the departments of the Central or State Government will be settled. If you want to apply for any kind of government tender, then the planetary transit is also favorable for that. Even if you want to take any decision related to the election, the sum of success. Promotion in the job will increase respect.

Taurus
Transiting in the ninth house of fortune from the zodiac, the influence of Shani Dev will be very successful. Although the work will go at a slow pace, there will be some obstacles but in the end, you will be completely successful. Efforts made for service or citizenship in foreign companies will be successful. Courage and courage will increase. The decisions taken by you and the work done will also be appreciated. Do not allow differences with senior family members or brothers to grow.

Gemini
The effect of Shani Dev(Saturn) will be very fluctuating while transiting in the eighth house, although, a lot will depend on your working method, what kind of plans you make. Avoid being a victim of a conspiracy in the workplace. Try that, complete the work and come straight home. It would be prudent to settle disputes and disputes related to court cases outside. Keep pleasing Shani Dev(Saturn) as much as possible and plant a Peepal tree.

Cancer
The effect of Shani Dev(Saturn), who is transiting in the seventh marital house from the zodiac, will be said to be good. There may be a slight delay in the talks related to marriage. Maintain relations with in-laws. Avoid doing common business, lending more money to someone, and also avoid fraud. There will be full cooperation of government power. If you want to apply for any kind of government job then the opportunity will be better. Decisions taken out of emotion can be harmful.

Leo
The effect of Shani Dev(Saturn) traversing the sixth enemy house from the zodiac is no less than a boon for you. Secret enemies will be defeated and even in court cases, there are signs of the decision coming in your favor but you need to be more careful from the point of view of health. There will be excess of running. If you are trying to make efforts for service or citizenship in foreign companies, then the opportunity will be favorable. Chances of receiving unpleasant news from a relative or friend.

Virgo
Transiting in the fifth education-child house from the zodiac, Saturn will give good success to the students and the students who sit in the competition. There will be indifference in love-related matters. Children-related worries can also bother. For the new couple, the birth of children and also the yoga of birth. Differences with senior family members and elder brothers may deepen, do not allow the situation of separatism to arise. Do not make any working public until it is completed.

Libra
Transiting in the fourth happiness house from the zodiac, Saturn will give many unexpected results. The long-awaited work will be completed, social prestige and position prestige will also increase. Matters related to property will be settled. If you want to buy a house or vehicle, then the opportunity will be favorable. Travel carefully during this period. Protect items from being stolen. Think about the health of the parents.

Scorpio
Transiting in the third mighty house from the zodiac, Saturn will increase the power of taking quick decisions in you. On the strength of his indomitable courage and valor, he will easily overcome difficult situations. There will be an increase in job promotion and respect. Whatever you decide once, you will leave it after completing it. Efforts made for service or citizenship in foreign companies will be successful. Make full use of your energy and move forward, you will be successful.

Sagittarius
Transiting in the second money house from the zodiac, Saturn will not only make you financially prosperous but will also make you spend on expensive things. The money given for a long time is also expected to be returned. With the help of your speech skills, you will easily get control over difficult situations. Be reflective of health, do not let the situation of separatism arise in the family as well. Examine the students and the students appearing in the competition More efforts have to be made to score good marks in the examination.

Capricorn
Being on the path of Shani Dev(Saturn), the lord of your zodiac is like a boon for you. Not only will all the efforts made in the direction of employment be worthwhile, if anyone wants to start the biggest work or sign a new contract, then the planetary transit will be very successful from that point of view too. Awaiting works will be settled in the departments of the Central or State Government. If you want to take any decision related to elections, then the sum of complete success is that too.

Aquarius
Transiting in the twelfth expenditure house from the zodiac, Saturn will bring more ups and downs in the coming time. There will also be a lot of running around. Financial constraints can also be faced due to high expenditure. Chances of getting bad news from friends and relatives also. Attempts made for foreign travel or foreign citizenship will be successful. Be mindful of health. Disputes and disputes related to court cases should also be resolved outside.

Pisces
The auspicious effect of Margi(direct) Shani(Saturn) is no less than a boon for you while transiting in the eleventh benefic house from the zodiac. The sources of income will increase. If you want to apply for any kind of government tender in central or state government departments also, then the planet transit will be favorable from that point of view also. Do not allow differences between senior family members and elder brothers. The responsibility of the child will be fulfilled. For the new couple, the birth of children and also the yoga of birth. There will be indifference in love-related matters.

The air from Delhi to Punjab was polluted, after the festival, the air pollution...

06/11/2021/9:32:am
New Delhi: Where due to the tremendous fireworks on the night of Diwali, air pollution has now reached a serious level in many cities...

Supreme Court said casteism has not ended even after 75 years of independence of...

28/11/2021/7:02:pm
New Delhi: The Supreme Court has said that the incidents of caste-motivated violence show that casteism has not ended even after 75 years of...