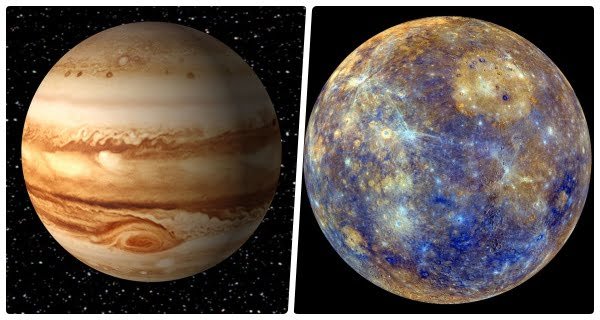 Amidst the changing movements of the planets, where Saturn has become transitory on October 11. At the same time, 2 more main planets of the Navagrahas are going to move from retrograde in October 2021, changing their speed.

According to astrology, all the 12 zodiac signs will be affected by these changes in the planets. So let’s know when Mercury and Jupiter are transiting retrograde?

The movement of planets has special importance in astrology, every astrologer keeps a special eye on the retrograde and path movement of the planets. A planet being in the Direct path state means that it is moving with its direct speed. Whereas on the contrary, when a planet makes a retrograde motion, it means that that planet is moving in the reverse direction.

Whereas Mercury is considered to be the factor of mathematics, logic, singing, communication, writing, commerce, etc. At the same time, it is believed that apart from making the person look genuinely young and gentle in nature, it also makes the person rational, intellectually rich, and skilled orator.

Retrograde planet effect
According to astrology, when any planet is retrograde, that planet is not able to give its full effect, which reduces its auspiciousness. At the same time, it is believed that due to this position of the planet, the natives have to face troubles and obstacles. This position also depends on the weak and strong planets at the time of birth.

Two planets will be retrograde on the same day
According to the Hindu calendar, on Monday, 18 October 2021, on the Shukla Paksha Trayodashi date of the month of Ashwin, along with Jupiter, the planet Mercury will also be transiting. At this time, where Jupiter will be retrograde in Capricorn, Mercury will be transiting in Virgo. The effect of the retrograde of these two major planets will affect the people of all the 12 zodiac signs from Aries to Pisces. Along with this, its effect will also be seen on the country and the world. Due to which special care has to be taken in the matter of health and money.

The result of being Direct path of Jupiter
According to the experts, after about 4 months i.e. 120 days, Jupiter is going to be retrograde on 18 October 2021. Due to this, along with increasing the auspiciousness of the Guru, there is a possibility of a gradual decrease in infection like a corona. At the same time, with this change, Jupiter is seen providing benefits to people associated with education, jobs, and business. Follow these measures to increase the auspiciousness of Guru

Guru’s Remedies
Worship Lord Vishnu on Thursday and offer yellow objects.
Worship the Banana tree.
Keeping fast on Thursday also increases the auspiciousness of Guru or Jupiter.
Respect the teachers and give them gifts.

This will be the special effect of Jupiter on these zodiac signs.
Aries: In the midst of praising the officers, there will be full support of the family along with profit in business.

Taurus: Along with increasing respect, there will also be benefits in terms of money. The spouse will get support.

Gemini: This trick of Guru will be very good for you too. There are chances of getting success in the field of education and business. There is a possibility of an increase in income. Any stalled work can be completed. You will get respect and respect in the workplace. A new project can be found. There will be chances of making money from travel.

Cancer: Jupiter will have an auspicious effect on the people of this zodiac. There will be chances of getting a promotion in the job. Respect will increase in society. Can buy a vehicle. Can get a new job. The economic situation is likely to be much better than before.

Leo: Relationships will improve in the midst of getting new opportunities. You will get good news.

Virgo: This time can be full of success for you. Whatever work you put in your hands, you will get good results. Your performance in the workplace will be good. You will get the full support of your relatives in any work. There will be a strong possibility of monetary gains. Financial problems can be overcome. The movement of money will continue. Many opportunities will come in handy during this period to get benefits.

Libra: In the horoscope of the people of the Libra zodiac, Mercury is considered to be the lord of their ninth house and twelfth house and during this time it will be in your twelfth house i.e. in the sense of expenditure, salvation, and settlement abroad. On the other hand, Jupiter is the lord of his third and sixth house and during this period it will be in his fourth house i.e. happiness, comfort, and mother’s house. During this period, your interest may be more in spending time alone and at the same time, your inclination may be towards spirituality. For those people who are businessmen, this period is likely to be favorable as the hard work done by them can bring positive results.

Scorpio: Property disputes will be resolved in the midst of the prospect of getting a job for the unemployed. Possibility of increase in income.

Sagittarius: Jupiter is also the ruling planet of this zodiac. It will be auspicious for you to be on the path of the Guru. You can hear some good news related to your job. With the increase in income, the problems related to money will be removed

Capricorn: Time will be good. Profit is possible in both office and business.

Aquarius: In the midst of increasing respect in society, there will be cooperation of officials in the office. You will get success.

Pisces: This trick of Guru can prove to be auspicious for you too. There is tremendous potential for advancement in the job. You can start a new job. Income may increase. Time will also be very auspicious for business people. Good results will also be obtained in the field of education.

Result of Direct Mercury
The transit of the planet Mercury in its own zodiac sign Virgo will give good results to most of the zodiac signs. In Vedic astrology, Mercury is considered the karaka planet of intelligence, logical ability, and business. This change of Mercury can cause a delay in profit for Sagittarius and health-related problems for Aquarius. Whereas it will be beneficial for all other zodiac signs to be the path of Mercury.

Mercury Remedies
Chant the mantras of Shri Ganesh.
Keeping fast on Wednesday also increases the auspiciousness of Mercury.
Worship Lord Ganesha on Wednesday and offer it to Durva.
Feed green fodder to the cow on Wednesday.

28/04/2021/9:54:am
New Delhi: Coronavirus continues to wreak havoc in the country. In many states of the country including Maharashtra, Delhi, Gujarat, Corona has created a...

Corona infection, even after taking both doses of vaccine in Madhya Pradesh, lost life

28/03/2021/11:29:am
Ujjain: The second wave of Corona is wreaking havoc in the country. The government has intensified vaccination to neutralize infections. But a surprising incident...

Russia’s Corona vaccine Sputnik-5 can be produced in India and China: Vladimir Putin

18/11/2020/9:46:am
Moscow: Russian President Vladimir Putin on Tuesday called on BRICS countries to work together to develop a vaccine for the coronavirus. He suggested that...