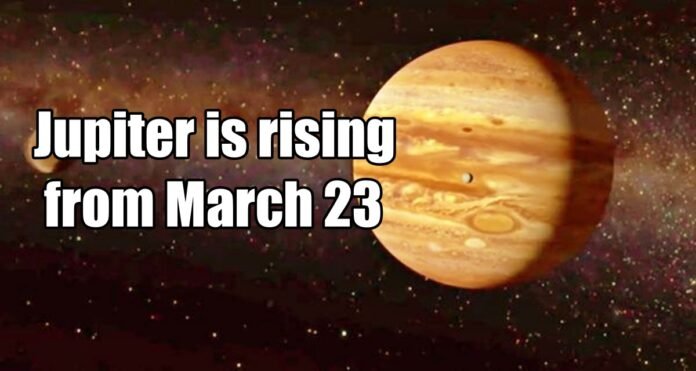 Changes in the zodiac signs of planets have a lot of importance in astrology. The transit of planets has a positive or negative effect on the lives of people. Devguru Jupiter is going to rise on 23rd March. This means that being away from the Sun, they show their effect with full force. In Vedic astrology, Guru is considered to be the most auspicious and giver of positive results. There is an increase in income and religion under the influence of Guru. So let’s know which zodiac signs are going to get great success due to the rise of Guru.

Aries
For the people of this zodiac, Jupiter is the lord of the 9th and 12th houses. But it will rise in Aquarius sign i.e. in your 11th house. This place is called the place of income. This simply means that you will get positive results related to income. If Jupiter is in a good or strong position in your horoscope and you can get big profits in employment or business. In this period, your income will increase in some way or the other and new avenues of income will open. If you have invested or are going to invest somewhere, then this is the right time to make a profit.

Taurus
Jupiter is the lord of the eighth and eleventh house for Taurus natives and it is rising in their tenth house i.e. Karma Bhava. This place is considered to be of employment, respect, authority, and state support. During this period, whether the people of this zodiac are employed or businessmen, they will perform better in every field. Jobseekers can get promotions or there can be a good increase in salary. There will also be new opportunities in business, due to which your income will increase in the long run.

Leo sun sign
Jupiter is the lord of the fifth and eighth house for Leo natives and it will rise in their seventh house. This place is for married life. In such a situation, your married life will be better and your relationship with your life partner will be stronger. There will be full cooperation of each other in any work. The rise of Jupiter in the seventh house is also a sign that your wife’s income will increase. If you are looking for a better relationship for marriage, then you can also get a proposal of your choice.

Libra
For Libra natives, Jupiter is the lord of the third and sixth houses and it is rising in their fifth house. Being born in your triangle house, the people of this zodiac will get its auspicious results. The fifth place is associated with children, education, creativity. In such a situation, people associated with education, art, and music will get special benefits. If you have thought of something new in any field, then your income can increase from it. The seventh aspect of Jupiter will also be on the income house, so eventually, its result will come out in the form of income.

Capricorn
For Capricorn natives, Jupiter is the lord of the third and twelfth house and it will rise in their second house. The second house is said to be the house of money and speech. During this time, you may get sudden monetary gains. A deal can be finalized in business, which will benefit you in the future. People associated with the field of marketing, lawyer, and education can get special benefits.

Biden will be the first to make the appeal as soon as he becomes...

04/12/2020/11:01:pm
Washington: Newly elected US President Joe Biden said on Thursday that he would be the first to appeal to US citizens to wear a...

France: Thousands of passengers stranded in trains overnight due to power supply problem

31/08/2020/9:24:pm
Paris: Thousands of passengers were caught overnight in high-speed TGV trains due to electricity supply problems in South Western France. They were longing for...

Google monitors your data even in incognito mode! The judge said – this is...

27/02/2021/10:18:am
Washington: When Google users are browsing in Incognito Mode, are their activities really hidden? A unit of Google's parent company Alphabet Inc. says that...