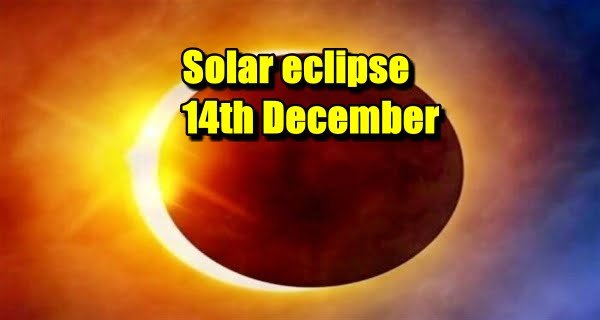 December 14 solar eclipse is not auspicious for politicians
The solar eclipse, which will be held on December 14, will be from 7:00 pm to 4:00 pm Indian time. Since the shadow of the eclipse is not visible in India, it has no religious significance, but the Sun’s solstice is also going to happen sometime after the eclipse, with the sun suffering in Scorpio. In such a situation, this eclipse is not auspicious for big politicians. Because there is a Rahu factor of politics, the people of politics who were dodging the public were playing a game of maze with the people. Because the sight of Rahu will go to the Guru, this time it is in Capricorn. With Saturn, the guru of Capricorn who is malefic, that’s why Guru Chandal Yoga is being formed this time from the point of view of Rahu which will last till April. A lot of things will come in front of the public and politics will be a bit difficult for the people so that some of what has been hidden in front of you will be shown in front of you. Will bring the truth in front of you because Rahu who is present at the moment due to the Guru’s vision, who is building Guru Chandal Yoga. People who have a guru in Capricorn or in the tenth house, especially they need to be cautious and those who already have Guru Chandal Yoga in their horoscope are more likely to suffer.

Effect and importance of Khandgrass solar eclipse
Although the eclipse is a common astronomical event that does not have much importance on human life, but it is considered very important in astrological calculations. Eclipse has an effect on the zodiac signs and the future times of the people. But this time it will not be affected because it is not visible in India. Due to the solar eclipse in the night, there will not be any thread in it nor will anyone have to take special precautions. If this eclipse appears, then pregnant women would have to take special precautions but this time it will not have any effect.

Will not take the sutak period
The reason for the eclipse at night is that this time the eclipse will not be seen in India. The reason for not being visible in India will also not be valid, but it is necessary to take some precautions during the eclipse period.

Do not forget this work
Gold is also considered to be prohibited during the eclipse period, so should not be forgotten even at this time. In special circumstances or for older and children the rule of sleeping is not valid.

Use of these things is forbidden
During the eclipse period, pregnant women should not use needles, scissors, knife etc.

It is harmful to see solar eclipse
The solar eclipse should not be viewed with the naked eye at all. Negative rays at the time of eclipse have a bad effect on the light of the eyes.

Add basil leaves to food items
Tulsi has the ability to absorb negativity, so before the eclipse starts, add basil leaf to the food items.

Keep the windows of the house closed
Cover the windows with newspapers or thick curtains so that no rays of eclipse can enter the house. If food is prepared during or before the eclipse, it should not be thrown. Rather, put basil leaves in it and purify it. After the end of the eclipse, after bathing and meditating, sprinkle Ganga water in the house and then go and take food.

Don’t use these things
During the eclipse, pregnant women should not use knife-knife or sharp-edged weapon in addition to not being directly affected by the eclipse. Because doing so has a bad effect on the body of the unborn child. Also, do not do sewing and embroidery work during the eclipse period, nor do you consume any kind of things.

Pregnant women should take special care
Pregnancy is considered more for pregnant women. It is believed that due to the harmful effects of the eclipse, it has a negative effect on the body of the infant in the womb. Therefore, pregnant women are advised not to leave during the eclipse.

Solar eclipse time
On 14 December, the solar eclipse will be from 7 pm to 4 pm from midnight till Indian time. In India, this eclipse is considered as Khandagras. Sutak period is not valid in Khandagras solar eclipse. But those who think during the eclipse of Sutak period, they should avoid food, travel, new work during Sutak period.

Corona cases of around 24 lakhs in the country, record 67 thousand new patients...

21/09/2020
United Nations: UN chief Antonio Guterres has reported that in the United Nations General Assembly this year, due to the epidemic, the first record...

21/08/2020
Brussels: The deadlock in the ongoing negotiations for an agreement on trade relations between the European Union and the UK following Brexit remained on...