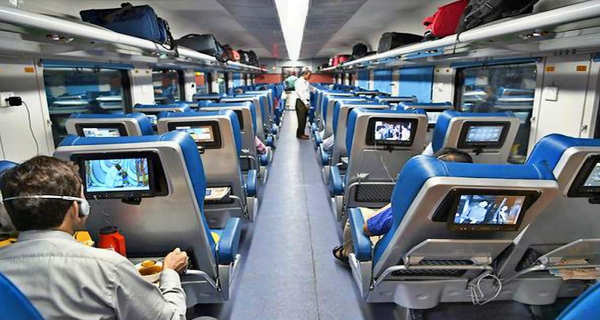 RailTel CMD Puneet Chawla said that media servers would be installed inside the compartments to ensure buffer-free services. Passengers will be able to enjoy high-quality buffer-free streaming in private devices and content will be updated periodically. The service will be commissioned at 8,731 trains including 5,723 suburban trains and more than 5,952 stations equipped with Wi-Fi.

The pilot project in the Western Railway, a Rajdhani train and an AC suburban train, is in the final stages of completion and testing. The revenue share of Railways and RailTel in this is 50:50 percent with PSUs expecting annual revenue of at least Rs 60 crore from this project.

09/03/2021
Kolkata: Big action has been taken on Tuesday in view of the West Bengal Assembly Election. The commission has transferred the state's DGP (Virendra)....

Justice NV Raman will be the next CJI of the country to take up...

06/04/2021
New Delhi: Justice Nuthalapati Venkata Ramana (Justice NV Ramana) was appointed as the next Chief Justice of India on Tuesday. According to the notification...

Gwalior station to be world-class, 8 companies shown up interest

28/06/2020
Gwalior: Gwalior was also included in the stations selected to make the major stations of the country world-class. According to the information received, 8...

06/01/2021
New Delhi: Industrialist Gautam Adani's company Adani Wilmar has made it clear that Saurav Ganguly, the chairman of BCCI and the former captain of...

25/09/2020
TOKYO, Japan:  Kioxia Corporation, a world leader in memory solutions, announced today it was awarded the 2020 Imperial Invention Prize from the National Commendation for...