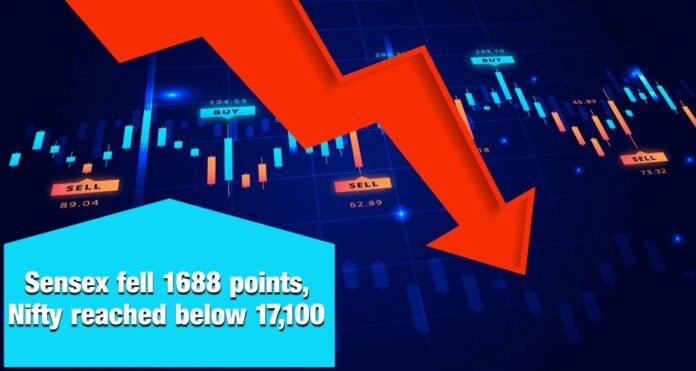 Mumbai: There was a big fall in the stock markets on Friday and the BSE Sensex fell by 1,688 points. The domestic market declined with a sell-off in the global markets amid concerns over the new variant of the Covid-19 virus. The 30-share BSE Sensex closed at 57,107.15, down 1,687.94 points, or 2.87 per cent.

Similarly, the Nifty of the National Stock Exchange closed at 17,026.45, down 509.80 points, or 2.91 percent. IndusInd Bank was the biggest loser with Sensex shares falling over six percent. Besides, Maruti, Tata Steel, NTPC, Bajaj Finance, HDFC, and Titan were also the major losers. On the other hand, the gainers include Dr. Reddy’s and Nestle India. Shrikant Chauhan, Head of Equity Research, Kotak Securities said that the market fell sharply this week due to increasing concern about the Covid-19 epidemic.

Both the Sensex and the Nifty have lost nearly four percent this week. Both the indices are down about eight percent from their highs. He said, “The new variants of Covid-19 are again raising concerns about the ‘lockdown’ and travel restrictions. Apart from this, inflation remains a cause of concern for many countries of the world. Foreign institutional investors were net sellers this week. In the coming days, the direction of the stock market will be decided by the new variants of Covid-19, inflation data, and the policies of the central bank.

No sector is untouched by the fall in the Sensex since October 19. The biggest fall came in the BSE Metals Index, which fell about 13.6% during this period. The BSE Energy index fell 10% during this period, while the BSE Bankex fell 8.2%. BSE Finance index declined 7.37%, while BSE FMCG index declined 7.04%, BSE IT index 6.68%, BSE Oil & Gas 6.1 percent, BSE Auto 6.01% and BSE Realty index declined 5.74 percent. During the same period, BSE Midcap and Smallcap have lost 5.65 percent and 4.6%, respectively.

Why did the market fall so badly?
Market experts are telling that due to the activation of new variants of Corona around the world, the effect of the disturbance is being seen on the market as well. There has been a worldwide panic after the cases of new variants of Coronavirus in South Africa (Covid-19 New Variant) were found. South African virologist Tulio de Oliveira told that a Kovid variant with multiple mutations has emerged in South Africa. After this, the United Kingdom (UK) has announced a temporary suspension of flights from 6 African countries (UK Bans Flights).

30/11/2020/9:57:pm
Madison (USA): The recount of votes for the presidential election in the US state of Wisconsin was completed on Sunday, including Democrat Joe Biden's...

26/02/2021/8:53:pm
New Delhi: The Directorate General of Civil Aviation has said in a circular that domestic flight operators can now give ticket concessions to passengers,...

Facebook is coming with dating app, get desired life partner in just 4 minutes!...

15/04/2021/4:32:pm
New Delhi: The social media platform Facebook will now help you find the love you want. Facebook is soon coming up with the Dating...