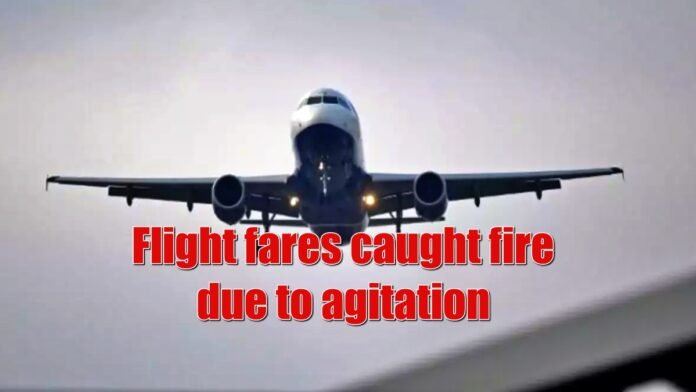 New Delhi: The ongoing violent demonstrations and protests against the Agneepath scheme have not only affected the rail and road routes but air travel is also affected. People are being forced to travel by plane due to road and rail routes being affected.

According to the news of Moneycontrol, the demand for plane tickets has suddenly increased significantly. This also affected the fare of air tickets and there is a sharp increase in their prices. The biggest impact was visible on the flights of Bihar-Jharkhand, where the ticket has increased up to three times. The next week’s ticket prices are seeing a more than double increase.

Effect of train cancellation
The Railways have canceled hundreds of trains after protests erupted in many places and trains were set on fire. This had a direct impact on the passengers and they are forced to choose the air route. The average fare from Patna to Delhi is usually 4-5 thousand rupees, which has reached 17 thousand rupees for the next week. Similarly, the fare from Delhi to Darbhanga has also increased to Rs 18 thousand, which remains 6-7 thousand rupees on normal days.

An unexpected jump is also being seen in the fares of aircraft going to the Northeast. Airfare from Delhi to Bagdogra has now reached more than Rs 10 thousand, while the fare of planes going to other places of North East has also increased more than double.

Railways canceled 1,500 trains
Agneepath scheme is being opposed in almost all the states including UP, Bihar, Jharkhand, Maharashtra, Rajasthan, and Haryana. Angry youths have also vandalized dozens of railway stations, while some trains were also damaged in Bihar. In view of this, the Railways have canceled the operation of hundreds of trains. According to the Railway Department, around 800 Mail Express trains have been canceled while 700 passenger trains have been canceled so far.

Delhi-NCR battling jam
The Agneepath plan was also opposed in many places in the national capital Delhi. Due to the increase in the security system and the route being diverted, there is a situation of jams in many places. In adjoining Noida, Ghaziabad, and Gurugram, people are also struggling with jams. Due to the checking of vehicles in Gurugram, traffic slowed down and there was a traffic jam for several kilometers. Even in Noida, the drivers were stuck in jam for hours.

Youth Congress workers stopped several trains at Delhi’s Shivaji Bridge railway station, after which the police took some workers into custody. Protests are going on in many cities including Jaipur, Ranchi, and Varanasi. Opposition parties and all organizations have called for Bharat Bandh against the plan today. Due to the increased security system, the situation of jams remains.

22/12/2020/9:13:pm
Washington: US President Donald Trump signed a law on Monday under which a post office in Texas would be named after the late Sikh...