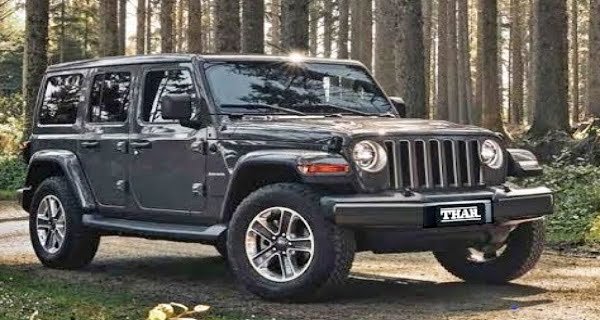 News Delhi: Indian carmaker Mahindra has confirmed that it will be launching a five-door Thar soon. In a press conference, the brand confirmed that the SUV is in the pipeline and will be made available between 2023 and 2026. Apart from this, the brand also informed that they aim to launch nine models in India by 2026. Other interesting vehicles in the lineup include a new generation XUV300, electric vehicles based on EV platform, and two more cars which have been codenamed as W620 and V201.

As far as the exciting five-door Mahindra Thar is concerned, it is most likely going to be based on the existing 3-Door Thar which hit the road in October, last year. According to a report in Motoroids, even though the car will look same in terms of style and design, it is expected to be longer and more spacious in comparison to the existing Thar. There is apparently going to be an additional row inside the car. From what is known till now, the rear and front overhangs will probably be stretched for getting more space. There are chances that the wheelbase might remain as it is. However, it must be mentioned that nothing official has been said in the matter till now.

In all likelihood, the all-new soon-to-be-released Thar will have more features than the existing model and is expected to be priced higher than the existing SUV. In terms of engine, it is being said that the five-door vehicle will be home to a 2.2-litre mHawk diesel engine which will have the ability to generate 130hp and 300Nm of torque. Most probably, the vehicle will also have a petrol option which will be a 2.0-litre turbocharged engine that will produce 150hp and 300 Nm of torque. The car is expected to offer both manual and automatic gearbox options.

Corona got close to 35 thousand cases in one day, figure crossed 10 lakh

17/07/2020/10:50:am
New Delhi: According to the number of corona infected, India is the most affected country after America, Brazil. If we talk about infected cases...

08/04/2021/10:11:pm
New Delhi: Review of the progress of the meeting, CM Arvind Kejriwal directed the officials to expedite the allocation of flats prepared under the...