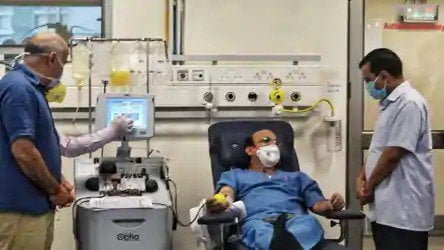 New Delhi: Plasma Bank: Even though the vaccine for coronavirus infection has not come out yet, due to the good recovery rate in India, thousands of people have been cured after defeating the disease. The plasma of such cured people is doing life work for other patients in this disease. The country’s first plasma bank opened on Thursday at the Institute of Liver and Biliary Sciences (ILBS) Hospital in Delhi. However, the hospital has strict conditions for plasma donation. Please tell that only healthy people between the age of 18 to 60 years who have recovered 14 days before corona will be able to donate plasma.

Chief Minister Arvid Kejriwal said in a digital press conference that the plasma bank will succeed only when people come forward and donate plasma. The government will give a letter of honor to the donor. He appealed to the media to encourage people to donate plasma. The government of Delhi also issued helpline number 1031 for donating plasma. Interested people will be able to register by calling 1031 number or WhatsApp on number 8800007722. After registration, doctors will contact these interested plasma donors over the phone.

He told that the car will be sent from here to bring the donor to the hospital or they can come by their own vehicle or taxi. The government will pay all their expenses. The government has decided that plasma will not be given at the individual level. The doctor will tell which patient needs plasma and they will contact the ILBS hospital. Plasma will be given after this.

Who can give plasma

The team of specialist doctors has set some rules for donating plasma. These rules have been fixed keeping in mind the health reasons. Who can donate plazma –

14/07/2022/8:58:pm
New Delhi: According to the big news, today Amarnath Yatra has been stopped once again due to bad weather. Significantly, after the cloudburst incident,...

06/12/2022/10:27:am
Washington: Gangs of Chinese hackers have defrauded the US and stolen hundreds of millions of dollars from the US COVID-19 relief benefits plan since...

13/12/2022/10:34:am
Pune: Political parties and various organizations have called for a Pune bandh today over the controversial remarks made by Maharashtra Governor Bhagat Singh Koshyari...

One Of The Best Fights in Naruto | Netflix India

SBI: These services will be discontinued on September 30 on debit-credit...