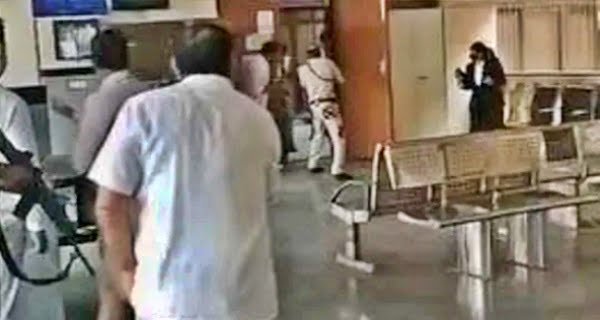 New Delhi: Sensation has spread in the capital due to the incident of death in the firing of a crook who was brought to the Rohini court for production. The top officers of the police are also shocked by the firing in the court premises in broad daylight. It was told that Jitendra Gogi, the leader of the infamous Gogi gang has been killed during the firing, while 3-4 other people have also been injured. The firing incident caused a stir in the court premises.

In the video available through the tweeter handler of Live [email protected], you can see people running around in the court amid the sound of gunshots. Police personnel is also responding to the firing while securing the common people and the complainants who came to the court.

In this video of the firing incident in Rohini Court, while the police personnel is seen giving a befitting reply to the firing, they are also making people away from the spot. The people present in the court premises and the common complainants are seen going out of the court in a state of confusion.

Let us tell you that Delhi Police officials have refused to consider the incident of firing in Rohini Court as gang war. Delhi Police Commissioner Rakesh Asthana told the media that it was not a gang war, but an attack on Jitendra Gogi. Two miscreants attacked Jitendra Gogi, who had come to appear in the court premises.

The miscreants came wearing the dress of a lawyer
After the incident of firing in the court premises, the police said that the miscreants who opened fire on the leader of the Gogi gang had reached the court wearing the dress of a lawyer. The miscreants took advantage of the black dress so that no one should suspect their dangerous intentions. As soon as Jitendra Gogi reached the court, the miscreants started firing on him. Jitendra was seriously injured after being shot. He was rushed to the hospital, but he died. According to the police, another crook including Rahul, a reward of Rs 50,000, was killed in the firing.

Jitendra Gogi was caught by the police a year ago
Let us tell you that about 1 year ago, Delhi Police raided Sector 83 of Gurgaon for the arrest of notorious gangster Jitendra Gogi after receiving secret information. During this, three of his gang accomplices Kuldeep Mann alias Fazza, Rohit alias Moi and Kapil alias Gaurav were also in the flat along with Gogi. After being surrounded by the police, Jitendra Gogi made a video on the phone and made it viral. He alleged that the police would encounter him and he wanted to surrender. Also, he had said that I want to surrender along with my colleagues Kuldeep and Moi. We do not have any weapons. At the time of arrest, a reward of about Rs 8 lakh was declared on Jitendra Gogi, a resident of Alipore, Delhi. Gogi was a very notorious crook, on whom all the cases like murder, extortion, and attacking the police were registered. Let us tell you that a few months ago, Kuldeep Mann alias Fazza, who is considered special of Jitendra Gogi, was encounter by the Delhi Police. This encounter took place in a flat in Rohini.

Tillu and Jitendra’s enmity is very old
According to police sources, both Tillu Tajpuria and Jitendra Gogi were students of Delhi University’s Shraddhanand College. While the enmity between the two started from the time of college itself. Not only this, there have been more than 20 gang wars between the Gogi gang and Tillu Tajpuria gang in the last 3-4 years, in which many people lost their lives. Earlier, there was a firing between these two gangs in the Burari area of ​​Delhi, in which three people lost their lives.

Tenants in America at risk of being evicted amid Covid-19

01/08/2021/8:27:pm
Washington: In the US, the nationwide eviction order is about to expire, threatening to force millions of citizens out of their homes amid the...

25/11/2021/1:56:pm
Islamabad: The Imran Khan government in Pakistan is already facing criticism for rising debt, unemployment, and inflation. Meanwhile, the leaked audio of a former...

08/07/2022/8:55:pm
Srinagar: Big information is coming out about Amarnath Yatra. A cloud has burst near the holy cave. In this, information has been received about...

Modi government gave big blow to workers before Holi, 8.1 percent of the interest...