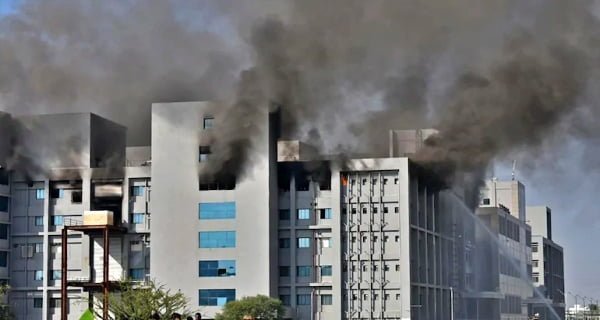 Pune: On Thursday, five people died in a fire in a building in the Manjari campus of the Pune-based Serum Institute of India. police gave this information. Earlier, Adar Poonawalla, CEO of Serum Institute of India, said that the fire incident had not caused any damage to the manufacture of Covishield Vaccine. The ‘Covishield’ vaccine for the nationwide Covid-19 Vaccination Program of Covid-19 is being manufactured at the Manjari Center of the Serum Institute. Those who died in the accident include Bipin Saroj and Rama Shankar of Uttar Pradesh, Sushil Kumar Pandey of Bihar, Mahendra Ingale of Pune, and Prateek Paste.

Poonawala tweeted, “Thank you all for your concern and prayers. The most important thing so far is that no person was killed or any more injured in the fire, while the fire has caused some damage to the building. “

Deputy Chief Minister ordered an inquiry
Mayor Muralidhar Mohol said that it appears that five people who lost their lives in the fire incident were working on the floor of the building. He said that the fire officials recovered the bodies during the inspection.

Maharashtra Deputy Chief Minister Ajit Pawar said that the state government has ordered an inquiry into the incident.

Deputy Commissioner of Police Namrata Patil said that the fire broke out on the fourth and fifth floors of SEZ 3 building located in the premises of the Serum Institute of India at around three o’clock in the afternoon. He said, “Nine people have been evicted from the building.”

An official of the fire department said that the reasons for the fire have not yet been ascertained. The official said that a team of the National Disaster Response Force (NDRF) has reached the spot.

The cause of the fire is not yet known.
Pune Police Commissioner Amitabh Gupta said that all the people trapped in the building where the fire broke out have been taken out. No one was injured in the incident. He said, “15 tankers of fire extinguishing water were put into use and it was controlled at around 4:30 pm.” The official said, “The cause of the fire has not yet been ascertained. Furniture, wires, cabins have been burnt to ashes. No important machinery or equipment was placed on the floor where the fire occurred.”

Ajit Pawar said, “I have received information from Pune Municipal Corporation about the incident and a detailed investigation has been directed into the incident.”
Chief Minister Uddhav Thackeray told journalists that according to preliminary information, the fire was caused due to power shortage. “As per preliminary information, the fire did not take place where Kovid-19 vaccines are being manufactured but in the unit where BCG vaccines are being manufactured,” said Thackeray.

10/07/2020
New Delhi: The coronavirus was stirred by the news of the purchase of a stake in HDFC by the People's Bank of China, the...

28/08/2020
New Delhi: Amidst the demand for non-NDA governed states to get GST compensation immediately, the Center on Thursday gave the states two options to...

03/01/2021
Bhopal: After the Madhya Pradesh by-election, the much-awaited cabinet expansion of BJP's Shivraj government took place on Sunday. In a dignified and brief ceremony...