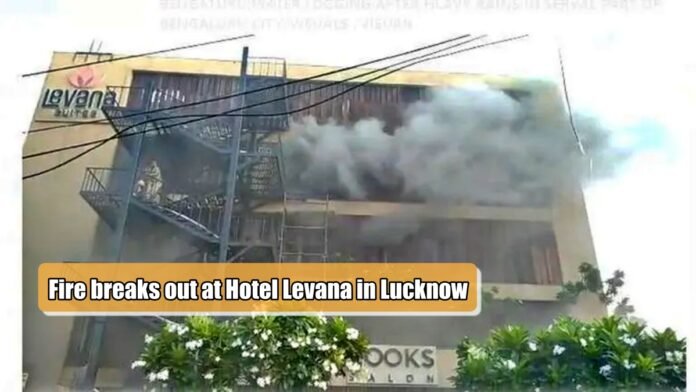 Lucknow: A huge fire broke out in Hotel Levana in the capital Lucknow on Monday morning. A woman and a man died in this accident. At the same time, treatment of 9 injured people is going on in the burn unit of the Civil Hospital. Many people are feared to be trapped inside the hotel. The fire in the hotel caused a stir in the area. Several fire tenders have reached the spot and are trying to douse the fire. This hotel is located in the city’s VIP area Hazratganj. An eyewitness outside the hotel feared that more than 20 people are still trapped inside. 15-20 vehicles of fire brigade are engaged in extinguishing the fire on the spot. It is not yet known how the fire started.

It is being told that as soon as the information about the accident was received, senior police and district officials reached the spot. The fire brigade teams are trying to control the fire. The reason behind the fire is not yet known.

Initially, a short circuit is being told as the reason for the fire. Further investigation is on in the matter.

It is being told that the hotel staff immediately informed the fire department about this. No casualties have been reported in the arson. At present, the cause of the fire is being ascertained. The investigation is on as to why the fire broke out so much. The picture of the matter will be clear only after the investigation.

On the other hand, Uttar Pradesh Chief Minister Yogi Adityanath took cognizance of the fire at Levana Hotel in Lucknow district. The Chief Minister has directed the officials of the district administration to provide proper treatment to the injured. Along with this, the District Magistrate and senior police officers have been instructed to reach the spot immediately and speed up the relief and rescue work.

The launch of Poco M3 will be confirmed on November 24, will get low...

Assam CM speaks to Union Petroleum Minister to inform him about explosion at Baghjan...

09/06/2020/11:10:pm
Gauhati: Assam Chief Minister Sarbananda Sonowal spoke to Union Petroleum Minister Dharmendra Pradhan to inform him about the explosion at the Baghjan oilfields and...

ED attaches assets worth Rs 13 crore to former chairman of...

Kejriwal’s announcement on increasing pollution; Schools will remain closed for a...