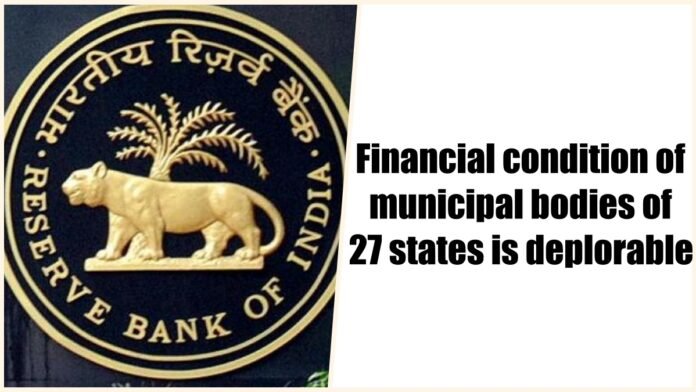 Whatever grant they get from the state governments and the center, they run their work. What an irony that on the one hand, the population in the cities is increasing day by day, while the civic bodies are unable to do so due to paucity of revenue to provide better facilities to the citizens. By the way, it has also been said in the report that there has been improvement in the structure of the municipal bodies in the last few decades, but no significant improvement has been done. The reason is that the local bodies lack strong means of earning revenue. This report has been released after examining the financial accounts from 2017-18 to 2019-20.

RBI is of the opinion that in order to provide better facilities in the cities, the municipal bodies need to strengthen their economic condition, for which they should raise strong resources for their revenue apart from grants from the Central and State Governments. Because people in cities will get world-class facilities only when the municipal bodies have their own revenue. Apart from expressing concern in the report, the methods of raising revenue for the local bodies have also been elaborated. First of all, the bodies should start levying taxes on vacant land.

Along with the buildings, taxes should also be started on the land which is not being used by anyone. Not only this, if someone does renovation, tax should be collected from that also. Apart from this, bonds should be issued for capital investors, so that the revenue can increase. Due to this, there will be a little more financial burden on the people, but in return, they will be able to get more facilities.

If we talk about the local elections going to be held in Delhi, then the Delhi State Election Commission has fixed the limit on the campaign expenditure of the candidates regarding the MCD elections. Any one candidate can spend only up to Rs 8 lakh during the campaign. However, earlier in the 2017 MCT body elections, the expenditure limit was Rs 5.75 lakh. Which has been increased this time. But the question is, to what extent the concerns and suggestions of RBI can be implemented or it remains just a bundle of paper, however, if the report of the Reserve Bank is implemented seriously, then the municipal body will be able to overcome the economic crisis to a large extent. can recover from.

Russian troops are accused of massacring hundreds of civilians in Bucha

12/04/2022/1:39:pm
Xiaomi 12 Pro smartphone launch date in India has been introduced on Tuesday and the corporate is bringing its newest flagship smartphone to the...

27/10/2022/8:48:pm
New Delhi: India is continuously moving towards self-reliance in the field of defense. Tata Airbus has been entrusted with the responsibility of making the...