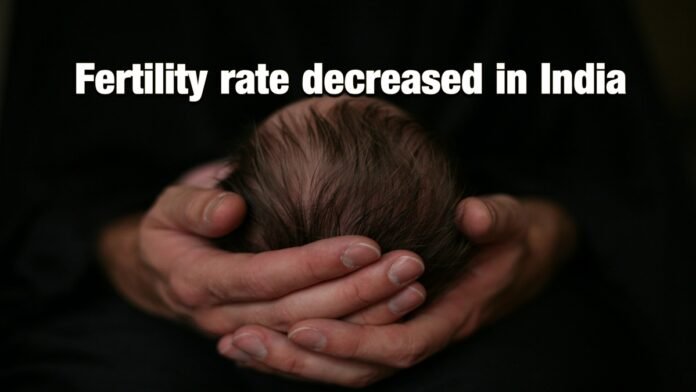 New Delhi: There has been a decline in the total fertility rate in the country. According to the second phase of the National Family Health Survey-5, the average number of children a woman gives birth to in her lifetime has come down from 2.2 to 2. While the contraceptive prevalence rate has increased from 54% to 67%. The Union Health Ministry released these figures on Wednesday. This indicates that the population of the country is stabilizing. 2.1 The total fertility rate is seen as the replacement rate, which is an important factor in population growth.

In the fourth edition of this survey, conducted from 2015 to 2016, the total fertility rate of the country was 2.2. At the same time, this survey of the 5th phase has been done between 2019 and 2021. It shows the success of the efforts made for population control.

Contraceptive prevalence rate rising
VK Paul, a member of the health committee in NITI Aayog, said that the National Family Health Survey-5 shows that there is more progress towards achieving the Sustainable Development Goals. The data found in this survey will help the government regarding universal health coverage.

At the same time, the contraceptive prevalence rate at the national level has increased from 57 percent to 67 percent. This survey shows that the unmet needs of family planning have also fallen from 13 percent to 9 percent.

The Government of India started the family planning program in 1952 for population control. Although initially many problems had to be faced due to wrong policies, due to which women were using contraceptive measures on a large scale. Newlyweds also had limited resources of contraceptive means. However, in the last few years, it has improved due to changes in this program.

A central government official told Hindustan Times on the condition of anonymity that work on population control was going on in India for a long time. In fact, India was the first country to start a family planning program at the national level and the encouraging results we are seeing now are the result of continuous and concerted efforts of the central and state governments.

The success achieved by previous efforts
Mission Parivar Vikas was launched in 2016 to provide better services related to contraceptive means and family planning. It focused on the 146 districts of Bihar, Uttar Pradesh, Assam, Chhattisgarh, Madhya Pradesh, Rajasthan, and Jharkhand with high fertility rates and ensured that contraceptives were available at all levels. Experts say that this program has done better work regarding family planning.

Complete immunization has increased from 62% to 76% in children aged 12-23 months. Prenatal pregnant women got more than 4 counseling services from health care providers.

Institutional births increased from 79 percent to 89 percent. There was a slight improvement in child nutrition indicators. At the same time, the number of underweight children decreased from 36 percent to 32 percent. Apart from this, the rate of breastfeeding increased from 55 to 64 percent within 6 months.

After a tough challenge, Nitish will be the CM for the fourth time in...

11/11/2020/10:11:am
Patna: Overcoming the wave of anti-incumbency in Bihar and the tough challenge of the opposition, the NDA led by Nitish Kumar (NDA) achieved the...