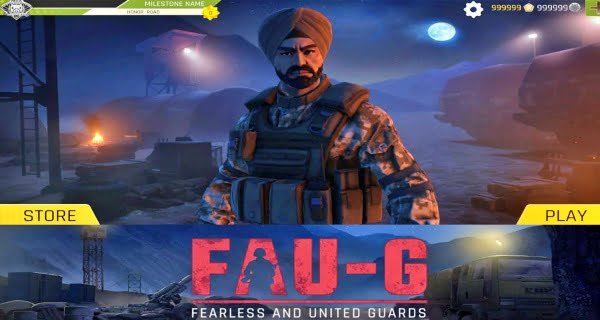 New Delhi: games based around the Indian armed forces has finally launched today after months of anticipation and hype. The game was launched on the same day as the country celebrates its 72nd Republic Day, in line with the game’s theme that revolves around the Indian Armed Forces. In a disappointment to some users, FAU-G: Fearless and United Guards has only launched for Android smartphones for now. The game was first listed on the Google Play Store in November when the pre-registrations for FAU-G had commenced. It is not known as to when FAU-G will be launched for Apple iPhone users.

Now, FAU-G is available to download on Google Play Store and the download file is slightly more than 430MB in size. The game, when downloaded, takes up a total of 622MB on your smartphone. The game starts with a standard home screen, that shows the main character for FAU-G, Lieutenant Singh in the middle. On the top right corner, the interface shows all the reward points, a settings option, and a ‘plus’ icon that takes you to` in-app purchases. The home screen is called ‘Base.’ On the top right corner, it shows the username, along with the progress map, which is called Honor Road, and shows the user’s current ranking. On the bottom, there are two buttons – ‘Store’ and ‘Play’, out of which, the Store button takes you to the in-game store where you can purchase weapons, select load-outs, and buy tokens. Currently, FAU-G only has the campaign mode live, with the game showing that a Team Deathmatch and a Free For All online modes are coming soon.

FAU-G Home screen
The campaign mode starts with an animated monologue from Lt Singh, who narrates the events of the Galwan Valley clash of June 15, when Indian soldiers were caught off guard by Chinese forces on the Galwan Valley border, followed by a landslide which kills Lt Singh’s two team-mates. The game’s story picks on from that clash and is a tale of how Lt Singh infiltrates the Chinese camps in order to look for his teammates.

While FAU-G: Fearless and United Guards does offer good graphics with decent gameplay, the difficulty levels for the game could be a bit too hard for some smartphone gamers. In our first test, we played the game for about an hour and barely made it past the first mission once. In terms of the gameplay, the fight sequences, at times seem like a drag and way too difficult, as about seven to eight soldiers surround Lt Singh in the later stages of the first mission. Apart from that, the first mission only allows gamers to pick up melee weapons like rods and stick that are dropped by the enemies Lt Singh defeats. The rest of the time, users are left with a hand-to-hand battle, which takes some time to defeat each enemy. On top of that, being surrounded by seven to eight soldiers (some of them carrying melee weapons), makes things a bit too difficult at certain stages. It is also not very feasible to pick up weapons mid-battle, given that multiple enemy soldiers are taking shots at Lt Singh at once.

In terms of weapons, the game allows users to keep only two weapons in a single loadout at once. Melee weapons like sticks and swords have a life, which reduces with each hit. On an average, a melee weapon allows users about 10-12 hits in one life. In order to pick weapons, the method is familiar as it requires users to walk over them to pick an item. All the cut scenes, voice overs, and dialogues within FAU-G: Fearless and United Guards are in Hindi with English subtitles. In order to rejuvenate health and stamina, users need to sit next to a bonfire. It takes about 15-20 seconds for the health to rejuvenate completely.

Despite the decent gameplay and great graphics, it is unlikely that FAU-G: Fearless and United Guards will get users hooked after their first encounter, as the difficult and singular fight sequences make it a bit monotonous, at least in the first mission. However, the game does deliver on its promise of making a truly new game and offers great graphics with simple, user-friendly controls and user interface. And while the game may not look as polished as the titles it is being compared with, there is a lot of scope for improvement within FAU-G. It can be safe the assume that nCore Games will keep improving the experience with periodic updates over the course of time.

02/11/2020
Tehran: Iran's Air Force began its annual exercise on Monday. State TV has reported that old fighter jets made in America and Russia as...

05/01/2021
London: Coronavirus cases are continuously increasing in Britain. The new form of the virus (Corona Strain) has made Britain panic. Given this, Prime Minister...

11/02/2021
New Delhi: Defense Minister Rajnath Singh on Thursday gave a statement on the impasse issued by China in the Rajya Sabha during the budget...

30/08/2020
Micro-blogging website Twitter has announced to hide 'copypasta' tweets from its platform. Copy pasta tweets are those which are copied and paste from source...