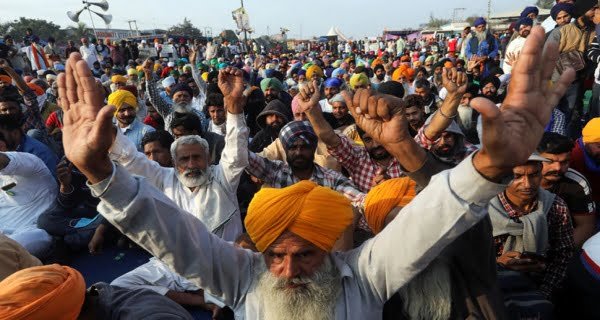 New Delhi: Farmer Organizations agitating on the Agricultural Bill have rejected the proposal received from the Central Government. On Thursday, the Joint Kisan Morcha (Sanyukta Kisan Morcha) on Singhu Border called a meeting to think about the new proposal from the government. Leaders of 32 agitation organizations participated in this meeting. Simultaneously, farmers are adamant on the demand to withdraw the three agricultural laws and wear the Minimum Support Prize as a legal deposit.

It is to be known that the tenth round meeting was held between the farmers’ organization and the government agitating for agricultural laws. In this meeting, the central government made the biggest proposal so far to the farmers. The government said, “Affidavit of the three agricultural laws in the Supreme Court will put a temporary moratorium for one and a half to two years. After this a committee will be formed in which the three will discuss the law and MSP, after which the committee will implement the report.

End all three laws
Farmer leader Joginder S. Ugrahan, who came out after the meeting, said, “It has been decided that no government proposal will be accepted unless they repeal the laws. In tomorrow’s meeting (with the government) we will say that we have only one demand, to repeal the laws and legally authorize the MSP. All these have been unanimously decided. “

13/10/2020
Srinagar: Mehbooba Mufti, the head of the People's Democratic Party of Jammu and Kashmir, has been released after 14 months of house arrest. Jammu...

19/12/2020
New Delhi: India suffered a humiliating defeat in the Adelaide Test. After getting a lead of 53 runs in the first innings, the Indian...

10/11/2020
Washington: Nearly a week after the Presidential Elections, elected representatives of the Republican Party and the Trump administration have once again passed the Affordable...

06/12/2020
Indore: The leaders of Madhya Pradesh are also following the path of Uttar Pradesh Chief Minister Yogi Adityanath. After discussions of changing the names...