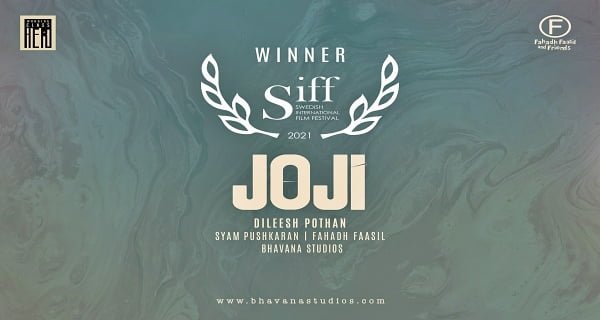 Mumbai: Fahadh Faasil’s Malayalam feature film ‘Joji’ has won the top prize at the Swedish International Film Festival. The actor gave this information on Thursday. Sharing the news on Facebook, the 39-year-old actor revealed that the film directed by Dilish Pothan has won the Best International Feature Film award at the film festival.

“Joji”, released on Amazon Prime Video, is inspired by Shakespeare’s play “Macbeth”. This crime drama film revolves around the character of Faasil, Joji, who is an engineering dropout and lives with his strict father and two brothers.

Actor Nawazuddin Siddiqui, Vir Das’s special show, and Sushmita Sen starrer series ‘Aarya’ have earned India nominations at the 2021 International Emmy Awards. Siddiqui has bagged a nomination in the Best Actor category for his Netflix film “Serious Men”, the International Academy of Television Arts and Sciences announced on Thursday. He will be seen alongside British actor David Tennant (Des). Along with Israeli actors Roy Nick (Normally) and Colombian Christian Tappan (El Robo del Siglo or The Great Heist) are nominated for this category.

Directed by Sudhir Mishra, “Serious Men” is an adaptation of writer Manu Joseph’s 2010 novel of the same name. The 47-year-old actor shared the joy of the nomination with his fans on Twitter. He tweeted, “Wow!!! I have been nominated for the Best Actor Award at the prestigious International Emmy Awards for Serious Men. Congratulations to the team of Serious Men, director Sudhir Mishra, others, and Netflix.” Sushmita Sen’s Disney+ Hotstar series “Aarya” directed by Ram Madhvani has made it to the last four of the Best Drama Series category.

The show is nominated along with Chile’s “El Presidente”, Israel’s “Tehran” and the UK show “There She Goes” season two. “Arya” is the official remake of the popular Dutch crime drama “Penoza”. Produced by Ram Madhvani and Sandeep Modi, “Aarya” garnered a lot of praise after its release in June last year. The team is currently working on its second season. Madhvani said that he is “proud” of the show’s nomination and dedicated it to the cast of “Aarya” and the entire production team. “To be nominated in the category of Best Drama Series at the International Emmy Awards is indeed something that makes us proud,” the director told PTI.

Das’s Netflix comedy special “Vir Das: For India” has been nominated in the comedy category along with popular French show “Call My Agent”, UK’s “Motherland: Christmas Special” and Colombian series “Promesas de Campana”. This third special show of Das with Netflix was released in January 2020. Das said he is honored to be nominated for an International Emmy Award.

The actor said in a statement, “I am very happy that this is for a show made about our culture and our people. This particular show is my love letter to India and it is unbelievable.” The winners of the 2021 International Emmy Awards will be announced during a ceremony to be held in New York City on November 22. It is worth noting that filmmaker Richie Mehta’s “Delhi Crime” won the Best Drama Series award in November 2020.

06/01/2021/10:21:am
Pune: A Pune-based court on Tuesday issued a notice to the Serum Institute of India (SII) on the application of a pharmaceutical company and...

India vs Pakistan: Know-how is Dubai Cricket Stadium pitch and how will be the...