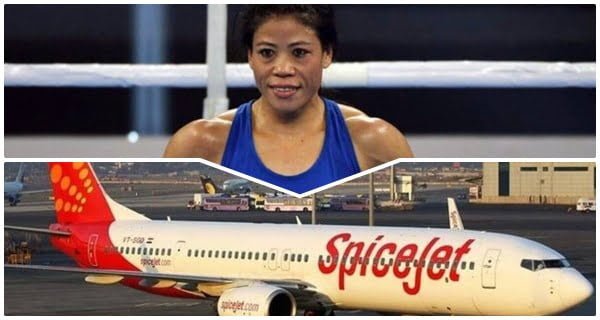 New Delhi: A SpiceJet aircraft carrying the Indian Boxing Team along with Marry Kom has made an emergency landing at Dubai Airport. According to the information received, this was done due to a lack of fuel. During this time a disturbance also occurred due to which the flight was allowed to land at the airport after a delay of half an hour.

Actually, this SpiceJet aircraft was going to fly the Indian team from Delhi to Dubai. Before landing, the pilots of the aircraft had informed ATC that the aircraft was running on fuel shortage. Subsequently, all members of the team were allowed to enter and land in the United Arab Emirates. At the same time, the entire incident has been reported to the DGCA and an inquiry has been ordered.

All players safe
Issuing a statement on the incident, the airline said, “An Indian boxing team traveled in a SpiceJet flight from Delhi to Dubai today. It has safely reached Dubai and all passengers have approved immigration. The flight and passengers had proper documents. “

The company continued, “The flight was not recorded as a cargo flight. It was a regular passenger flight under the Air Bubble Agreement and the same aircraft is bringing passengers from Dubai to India.”

13/12/2020/6:34:pm
Chandigarh: Lakhminder Singh Jakhar, DIG (Jail) of Punjab has resigned in support of the farmer movement. In a letter to the Principal Secretary of...

15/03/2021/1:43:pm
Beijing: China has been facing economic troubles due to the Coronavirus epidemic and its habits, which have hit the target of the world. President...

08/01/2021/11:08:am
Bhopal: After Madhya Pradesh, the fear of bird flu has increased. Symptoms of bird flu have been found in chickens after crows. Preliminary examination...

Iran’s military begins military exercises near the Strait of Hormuz

10/09/2020/11:32:pm
Tehran: The Army of Iran commenced a three-day annual naval exercise from Thursday near the strategically important Hormuz Strait. Government TV has reported this....