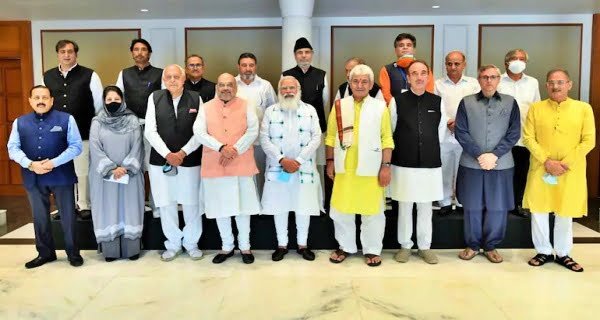 New Delhi: Prime Minister Narendra Modi on Thursday held a meeting with 14 leaders of eight political parties of Jammu and Kashmir. In this all-party meeting, many issues including the special status of the state, change in delimitation, elections, and restoration of full statehood were discussed. After the meeting, Jammu and Kashmir BJP President Ravindra Raina said that PM Modi organized a very good meeting. He said that all senior leaders of Kashmir participated in this meeting. He said that the Prime Minister assured full cooperation for the bright future of Kashmir. The PM said that all the people of Kashmir live in my heart. Will work for the development and well-being of Kashmir.

Mufti said that talking with China, where there is no involvement of people, a ceasefire with Pakistan, reduced infiltration, if the people of Kashmir get relief, then you should talk to Pakistan again. He said that the strictness in Kashmir should be stopped.

Congress placed five demands
At the same time, former Jammu and Kashmir Chief Minister Gulab Nabi Azad said that he has put five demands on behalf of Congress in the meeting. Ghulam Nabi Azad said that the meeting held today. We have done many things on behalf of Congress. The state should not be divided. Asked the selected people. In the end, after saying all the things, 5 big demands were placed in front of the government.

Azad told that his first demand is that statehood should be given back. Inside the house, the Home Minister and the PM had given an assurance that we would restore statehood at a time. We said that the time has come, there is peace, there is also a ceasefire. There could not be a more favorable time than this.

Regarding the second demand, he said, ‘We have also demanded this, democracy has to be strengthened, Panchayat and Zilla Parishad elections should be held and now assembly elections should also be held immediately.’

Azad told about the third demand that there were domicile rules. The rule of land was from the time of our Maharaja, later there was also a job. The central government should guarantee that when it brings the bill, it should guarantee jobs.

Raising the issue of Kashmiri Pandits, he said that many Kashmiri Pandits are out of 30 years, they are in Jammu and Kashmir. Mostly outside, it is the fundamental responsibility of every political party and leader of Kashmir to bring back the Pandits of Kashmir and help the government to settle them.

As the last demand, Azad said that on August 5, the state was divided into two parts, which should also be considered. Ghulam Nabi Azad said that about 80% of the parties talked on Article 370 but the matter is sub-judice in the court. Our demands include early full statehood, elections to restore democracy, rehabilitation of Kashmiri Pandits, the release of all political prisoners, and guarantee of land, employment, he said.

On the other hand, Kavinder Gupta said that in the meeting all the political parties gave their views. He said that I think the political process is going to start in the coming time. The elections will also be held after the delimitation process. Once again the assembly will be formed there. Gupta said that the process will be implemented, people are hoping that they will get a representative. He said that Article 370 has been abolished. It should not be thought that it will never be implemented back.

Nirmal Singh, who was the Deputy Chief Minister of Jammu and Kashmir, said that there have been open talks. He said that the PM has spoken of moving forward for the development of Kashmir. Everyone kept their word. Singh said that we want that elections should be held in Kashmir in the coming times, democracy should be restored. Nirmal Singh said that almost all the political parties agreed that there should be peace in Jammu and Kashmir and the government should come there in a democratic way. He told that the PM appealed to all the leaders that there will be peace only when everyone works together. Singh said that the delimitation will be done and after that further process will be done. The Delimitation Commission will discuss with everyone, after that things will move forward.

37-year-old woman climbed on the mountain after becoming nude, told this is art

24/04/2021/10:53:am
London: A consortium of Indian banks, led by the State Bank of India (SBI), on Friday pleaded strongly to the fugitive liquor businessman Vijay...