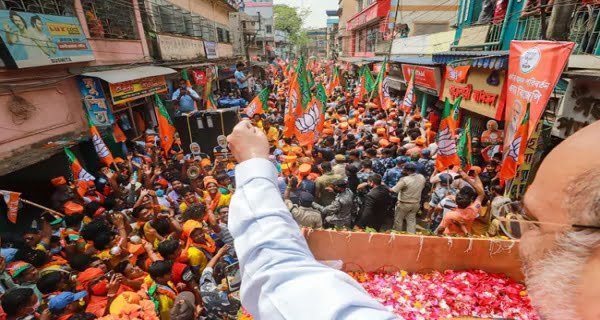 New Delhi: The West Bengal Assembly Election is also facing the threat of Coronavirus. Given this, the Election Commission of India has amended its guidelines for the assembly elections. Under this, no roadshow and bike rally will be allowed in the state now. Also, more than 500 people will not be able to attend the election rally.

The Election Commission gave strict instructions to follow the guidelines
The Commission had said, ‘All the candidates and political parties have to strictly follow the Corona Guidelines. Strict action will be taken against any kind of rule violation. It will be the responsibility of the organizers of the rally to provide sanitizers and masks to the people present in the rally. Also, gather as many people in the rally as they are allowed.

The Election Commission had said that star campaigners and party candidates should wear masks themselves and motivate supporters as well. Apart from this, ask the supporters to pay attention to sanitizer and social distancing.

27/01/2021
New Delhi: There has been a huge increase in the strength of the Indian Air Force, as three more Rafale Fighter Plane aircraft from...

10/04/2021
Indore: In view of the worsening situation of corona infection in Madhya Pradesh, the state government has extended the lockdown period in Indore, Vidisha,...