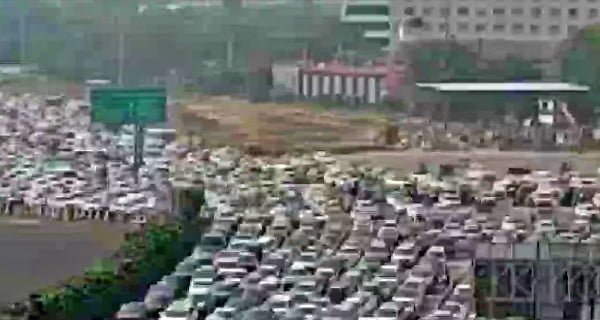 New Delhi: The farmers demanding the withdrawal of three agricultural laws have announced a Bharat Bandh on Monday. Its effect is being seen in many states. The farmers say that they will close all the borders going to Delhi. Delhi Police is alert about this, as well as Punjab and Uttar Pradesh Police have also issued traffic advisory in view of Bharat Bandh.

Meanwhile, the Delhi Police said that no protesters will be allowed to enter Delhi from the places of agitation on the city limits. Delhi Police has said that adequate security arrangements have been made as a precautionary measure in view of the Bharat Bandh. Check posts have been strengthened in the border areas. An adequate police force will be deployed in all important areas including India Gate and Vijay Chowk. All the roads connecting Delhi to the villages in the border areas will be strictly checked.

A look at the traffic routes diverted by UP Police
UP Gate: All traffic coming from Delhi will be diverted via Maharajpur, Seemapuri, Tulsi Niketan.

Duhai Peripheral Toll Plaza: Traffic coming from Meerut will be diverted from the ALT intersection, Meerut intersection. From Duhai, no vehicle will be able to move from Peripheral Way towards Dasna.

This traffic diversion will remain in Chandigarh
There will be traffic diversion at six centers leading to Mullanpur Barrier, which include 66 KV Light Point, Khuda Lahora Bridge, Dhanas Bridge, Tubewell Turn in Sector 25, T-Point near Dhanas Lake, and PGIMER Chowk.

Passengers heading towards Hallomajra Light Point will be diverted from Tribune Chowk towards Kalibari Light Point.

Traffic coming from Industrial Area Phase 1 and 2 at Poultry Farm Chowk will be diverted towards Tribune Chowk.

The route from Panchkula towards Hallomajra Light Point will be diverted towards Baltana Village near Raipur Kalan Barrier and Airport Light Point at Makhan Majra Mor.

Japan made the world’s fastest computer!

27/06/2020/10:20:pm
Japan's Riken Research Institute and Fujitsu Ltd. Has made the world's fastest computer. This computer is faster than the fastest computers in China and...

BMC’s decision amid Omicron’s concern, schools will now open in Mumbai from December 15

30/11/2021/8:47:pm
Mumbai: The Omicron variant of Corona has raised concerns all over the world including India. Meanwhile, the date of the opening of schools in...