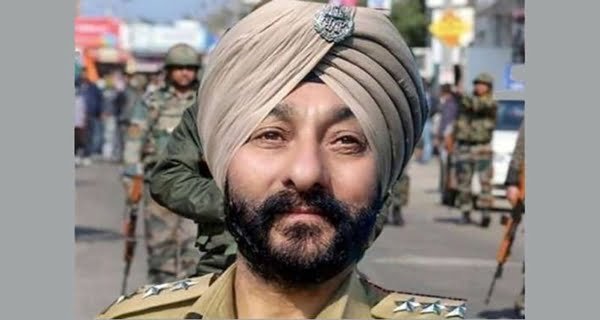 New Delhi: Suspended DSP Davinder Singh (DSP Davinder Singh) of the Jammu and Kashmir Police had allegedly shared ‘sensitive’ information with the bosses at the Pakistan High Commission. Officials associated with the National Investigation Agency (NIA) gave this information. He said that while investigating Singh’s role, the NIA traced the passwords to his secure social media accounts. On checking Singh’s social media accounts, his complicity with some officials of the Pakistan High Commission was revealed. Those officers were repatriated to Pakistan for their involvement in espionage activities in the national capital.

NIA has filed charge sheet
The NIA filed a charge sheet against Davinder Singh and five others on July 6 for allegedly “waging war against India” in connection with a terrorist organization like Hizbul Mujahideen. Before his arrest, Singh was posted in the anti-hijacking wing at Srinagar Airport. Officials said that Davinder Singh had been sharing sensitive information since 2019. He declined to give more details related to the case.

Like Kashmir, when there was a stone-pelting on the China border, the government has also found a way to deal with it. Yes, the troops deployed on the Line of Actual Control (LAC) will now be given full body protectors, ie full body protectors, to deal with the Chinese Army’s stonewalling. These will be exactly the same as the soldiers wear to avoid stone pelting in the Kashmir Valley.

Their names are in the charge sheet
Apart from Davinder Singh, the charge sheet also named the commander of banned organization Hizbul Mujahideen Syed Naveed Mushtaq alias Naveed Babu. Naveed, Rafi Ahmed and Irfan Shafi Mir, who had carried out several terror attacks in Kashmir, were in the car to get the former DSP out of Kashmir safely but all of them were arrested from Kulgam.

Many agencies have interrogated Davinder
On January 11 on the Jammu and Srinagar National Highway, the police arrested Singh, carrying terrorists Naved, Rafi and Irfan to Jammu. The Jammu and Kashmir Police handed over the case to the NIA after conducting a preliminary inquiry into the matter. Since then, many investigating agencies have questioned Singh. Singh has previously held several key positions. Singh was also among the officials to welcome Ambassador representatives visiting Kashmir in January.

26/11/2021/2:06:pm
Mumbai: The teaser of Ranveer Singh starrer '83' has been launched. Ranveer Singh, Deepika Padukone, and Kabir Khan have launched their teaser through their...

National census to be held in Nepal despite Corona epidemic

02/04/2021/11:03:am
Kathmandu: Nepal's statistical agency Corona Virus is preparing to start the National Census from May 9, despite the epidemic. The Central Bureau of Statistics...

China is making the world’s most dangerous weapon

17/10/2021/10:27:am
Beijing: China is continuously working on its plans to rule the world. His new weapon in this direction can be Hypersonic Cruise Missile. This...

21/03/2021/11:23:am
New Delhi: Samsung announced that its Galaxy M12 smartphone has become the top-ranked smartphone in Amazon's bestselling list on the very first day in...

By-elections in 56 assembly seats will be held on November 3...

Xiaomi’s powerful smartphone with 6000mAh battery is getting cheaper, will get...