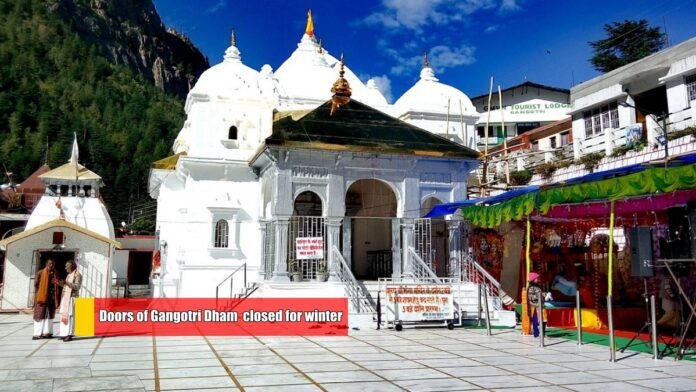 Uttarkashi: The doors of Gangotri Dham, one of the famous temples in the high Garhwal Himalayan region of Uttarakhand, were closed for devotees on Wednesday on the occasion of Annakoot. During the closure of the temple for six months in winter, devotees will be able to worship Mother Ganga at Mukhba village, during her winter stay. Sources in the Gangotri Temple Committee said that the doors of the temple were closed till winter at 12:01 pm after offering prayers to Mother Ganga amidst Vedic chants.

In the presence of Gangotri MLA Suresh Chauhan, religious officials, and hundreds of devotees, the process of closing the doors of the temple started at 9 am at Udai Bela. First of all, the crown of Mother Ganga was lowered, after which the doors of Gangotri Dham were closed for the devotees at 12:01 on the auspicious Lagna in Swati Nakshatra Preetiyoga in Amrit Bela. During this, the pilgrimage priest continued to recite Ganga Lahiri. After the closure of the doors, as soon as the idol of Ganga came out of the temple premises after riding in a doli, the whole atmosphere became devotional. To the tune of the band and the beat of the traditional dhol Damau, the pilgrim priests set out on foot for the village of Mukhba, their winter sojourn, carrying the Ganges Doli.

For night rest, Ganga ki Doli will reach Chandomati Devi temple four km before Mukhba from where she will be taken to Ganga temple in Mukhba on Thursday. Devotees will have darshan and worship of Maa Ganga in Mukhba for the next six months. On the occasion of Bhaiya Dooj on Thursday, the doors of Kedarnath and Yamunotri will also be closed for winter, while the doors of Badrinath will be closed on November 19.

Due to snowfall and severe cold in winter, the doors of Chardham are closed for devotees every year in October-November which are reopened in April-May next year. Lakhs of devotees come every year for the Chardham Yatra, which is considered to be the backbone of the economy of the Garhwal region. Due to the ban on Covid, this time record breaking devotees have reached during the regular Chardham Yatra which lasted after two years. According to government figures, 43,09,634 pilgrims have come for Chardham Darshan till October 24 this year.

18/06/2020/10:00:pm
Amsterdam:(PTI) A statue of Mahatma Gandhi has been vandalized here in the capital of Netherlands by unknown miscreants with graffiti and spray painting, amid...

Uproar over farm laws triggered proceedings of both houses, adjourned without discussion

You may have to spend more on the mobile bill soon,...