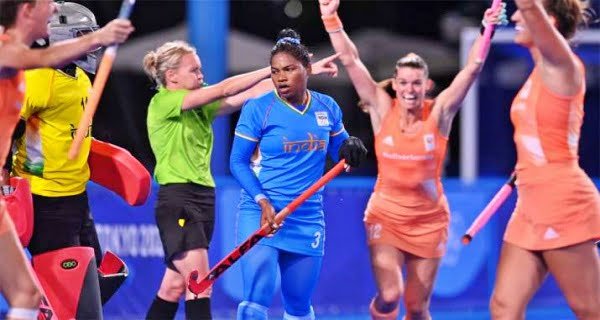 Tokyo: The Indian women’s hockey team played a strong game in the first two quarters against the world number one Netherlands in the opening match of the pool at the Tokyo Olympics here on Saturday but ended 1-5. Lost from Felice Elbers had given the Netherlands the lead in the sixth minute but Indian captain Rani Rampal took the team 1-1 in the 10th minute.

The Indian players showed excellent defensive play in the first two quarters, keeping the score level till halftime. But the break broke their momentum and the Netherlands showed an aggressive game and scored three goals. This shattered the Indian team’s hopes of reversing.

Margot van Geffen gave the Netherlands the lead in the 33rd minute. The three-time Olympic champion and the current silver medalist then scored two consecutive goals, with Albers scoring in the 43rd minute and Frederic Matala in the 45th minute.

It wasn’t enough that the Netherlands scored their fifth goal in the 52nd minute from the sixth penalty corner from Kaia Jacqueline Van Masaker. The Indian team will now take on Germany in the next Pool A match on 26 July.

11/12/2020/5:06:pm
Melbourne: The Australian Government has invested 4 million Australian dollars to conduct a joint study with Indian researchers about early detection of Covid-19 and...

06/02/2021/10:05:am
New Delhi: Farmers, who have been protesting against the new agricultural laws of the central government for more than two months, will today undertake...

Union minister Harsimrat Kaur Badal will resign from the government in protest against the...