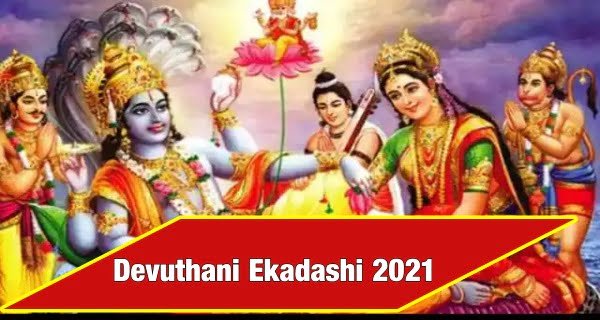 According to beliefs, after four months Lord Vishnu wakes up from yoga Nidra. Manglik works like marriages start from this date itself.

Due to the sunrise of Ekadashi Tithi on November 14, the fast and worship of ‘Devatthan Ekadashi’ will be held on this day.

What to eat and what not on Devuthani Ekadashi
Bananas, mangoes, grapes, etc. along with dry fruits like almonds, pistachios, etc. can be consumed during the Ekadashi fast dedicated to Lord Vishnu. Apart from this, all types of fruits, sugar, buckwheat, potato, sago, sweet potato, olive, coconut, milk, almond, ginger, black pepper, rock salt, etc. can be consumed.

God’s places are kept like this
On the day of ‘Devuthani Ekadashi’, after cleaning the house, after retiring from the bath, etc., one should draw the shape of the feet of Lord Vishnu in the courtyard. After this, after making a picture with ocher in an oak, keep fruits, sweets, berry, water chestnut, season fruit, and sugarcane at that place and cover it with a nugget. On this day, diyas should be lit outside the houses and at the place of worship at night.

Story
There was a demon named Shankhasur. Shankar had created a lot of disturbance in the three worlds. Then at the request of all the gods, Lord Vishnu fought with that demon and this war lasted for many years.

That Asura was killed in the battle and after that Lord Vishnu went to rest. Lord Vishnu’s sleep was broken on the day of Kartik Shukla Ekadashi and all the deities worshiped Lord Vishnu.

According to Shiv Mahapuran, the king of demons used to be arrogant in mythological times. He was a great Vishnu devotee. Due to not having children here for many years, he made Shukracharya his guru and received Shri Krishna Mantra from him. After receiving this mantra, he did severe penance in Pushkar Sarovar. Lord Vishnu was pleased with his penance and granted him the boon of having children.

By the boon of Lord Vishnu, a son was born to King Dambha. This son was named Shankhachud. Growing up, Shankhchud did severe penance in Pushkar to please Brahma. Pleased with his penance, Brahma asked him to ask for a boon. Shankhchud then asked for a boon that he should always remain immortal and no god could kill him. Brahma ji granted her this boon and asked her to go to Badarivan and marry Tulsi, the daughter of Dharmadhwaj, who is doing penance.
Shankhachud did the same and after marriage with Tulsi started living happily.

He conquered the gods, demons, demons, demons, Gandharvas, serpents, eunuchs, humans, and all the creatures of Triloki by his strength. He was a great devotee of Lord Shri Krishna. Disturbed by the atrocities of Shankhchud, all the gods went to Brahma and Brahma took them to Lord Vishnu. Lord Vishnu said that Shankhchud will die only from the trident of Lord Shiva, so you should go to him. Lord Shiva sent a group named Chitrarath as his messenger to Shankhchud. Chitraratha persuaded Shankhachud to return his kingdom to the gods. But Shankhchud refused and said that he wanted to fight with Maheshwar.

When Lord Shiva came to know about this, he left with his army for the war. In this way, a fierce battle took place between the gods and the demons. But due to the boon of Brahma ji, the gods could not defeat Shankhchud. As soon as Lord Shiva raised his trident to kill Shankhchud, the Akashvani said that as long as Shankhchud has the armor of Shrihari in his hand and the chastity of his wife is unbroken, then it is impossible to kill him.

Then Tulsi came to know that he was not her husband but he was Lord Vishnu. In anger, Tulsi said that you have deceitfully corrupted my religion and killed my husband. Therefore, I curse you that you remain on earth like a stone.

Then Lord Vishnu said- Goddess. You have done penance for me by staying in India for a long time. This body of yours will change into a river and become famous as a river named Gandaki. You will become the best Tulsi tree among flowers and will always be with me. I will remain as a stone (Shaligram) to make your curse come true.

I will reside on the banks of river Gandaki. On the day of Devprabodhini Ekadashi, the auspicious work is started by concluding the marriage of Lord Shaligram and Tulsi. According to Hindu belief, doing Tulsi-Shaligram marriage on this day gives immense virtue.

14/06/2020/8:56:pm
New Delhi: A plea has been filed in the Supreme Court raising concern over the safety of healthcare workers, including nurses and paramedical staffs,...

Rasha Kelej, the CEO of Merck Foundation Makes It to the List of 100...

25/08/2020/1:17:pm
Rasha Kelej, CEO of Merck Foundation and President, Merck More Than a Mother has been featured in the list of 100 Most Influential African...

Clashes between protesters and police taking out a rally to protest the murder of...

14/03/2021/10:18:am
London: On Saturday, clashes broke out between people and police protesting in protest against the killing of a woman going home in London, Britain....

2 people came to India from South Africa, Corona positive, stirred up by the...

27/11/2021/10:11:pm
Bengaluru: The risk of Coronavirus Omicron variant, a new variant of the coronavirus found in South Africa, is increasing rapidly in India. The central...