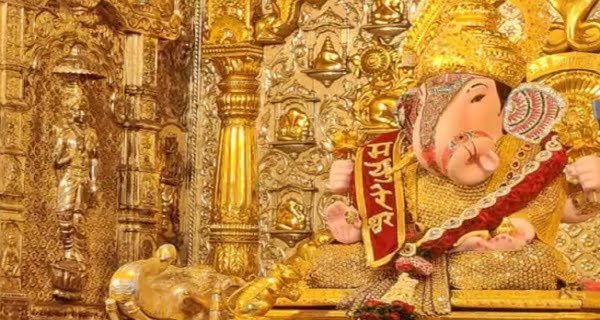 Pune: The festival of Ganesh Chaturthi is being celebrated all over the country. Following the Corona rules, idols of Ganpati Bappa are being installed from house to house. Ganeshotsav will last for 10 days. Due to the Corona epidemic, there have been few events in public places. Especially in states like Kerala, Maharashtra, and Delhi where the infection rate of the corona is high. Section 144 has been imposed in Mumbai on the day of Ganesh Chaturthi. Here people are not allowed to go to the pandals. Organizers have been asked to make arrangements for online darshan. Meanwhile, photos of the morning aarti have started pouring in from different parts of the country. Read here full coverage of Ganesh Chaturthi 2021 and watch photo-video

One of the famous and oldest Ganesh temples of Pune – Shrimant Dagadu Seth Halwai Ganpati Temple is decorated. Here Bappa was offered great food along with modaks and sweets. It is reported that on the occasion of Ganesh Chaturthi, a devotee has offered a 5 kg gold crown worth Rs 6 crore to the Dagdu Seth Halwai Ganpati temple. see pictures

Strictness in Maharashtra: After the government in Maharashtra, now the police have also issued guidelines. People have been appealed to celebrate Ganeshotsav only by following Corona rules. Any non-compliance of orders will face action under IPC section 188 (disobedience to order lawfully declared by public servant) and other relevant laws, the police release said. According to the guideline, not more than 10 people will take part in the procession in public circles during the bringing of idols and their immersion. It will not be more than five people to bring Ganpati in the house.

Naseeruddin Shah got pneumonia, was admitted to hospital in Mumbai

30/06/2021/3:41:pm
Mumbai: Bollywood's veteran actor Naseeruddin Shah has got pneumonia. He is admitted to Hinduja Hospital in Khar, Mumbai for the last 2 days, where...

18/07/2020/1:59:pm
Hyderabad: To protect against the coronavirus being developed by Bharat Biotech, the vaccine 'Covaxin' has been tested on 375 people across the country. Company...

It Tells You How Loud You Snore, Apart From Tracking Sleep, Ambient Noise

30/05/2021/9:53:pm
Fitbit fitness trackers have been detecting our sleep since 2017. The device determines sleep based on things like heart rate and movement. Now, the...