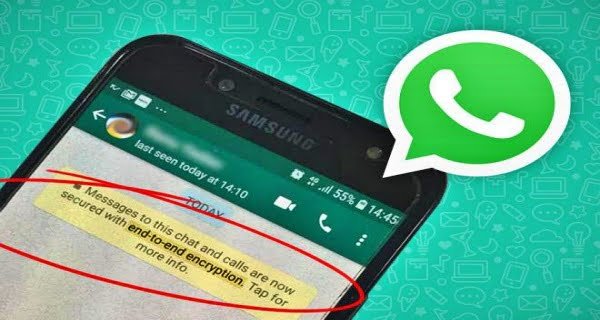 Facebook’s company, which is widely known worldwide as the most accessible app for messaging and talking (video and audio), is WhatsApp. About which it is claimed that its talk is end-to-end encrypted. Despite this, messages sent through this service leak regularly. This proves the company’s claim that the company uses an impenetrable security cover to keep the conversations of its 200 million users private. This also makes it clear that there is such a backdoor or a hack method, with the help of which anyone other than the sender and receiver of the message can infiltrate it. What is that method, why do you need to know?

What is encryption?
WhatsApp has always ensured its users that the photos, videos, messages, documents, and calls sent using its services are completely secure. The question of them falling into the wrong hands does not arise, as they use end-to-end encryption to protect it.

According to WhatsApp, the Signal encryption protocol is used for the flow of the conversation. Which can be considered as a safety lock. Whose key is only with the sender and receiver of the message? The special thing is that this encryption is turned on automatically, there is no need to set any settings to activate it or adopt any method like secret chat to keep your messages secure. This method of signal encryption is a cryptographic protocol developed by Open Whisper Systems in 2013.

How conversations leak
Generally, the leak of WhatsApp messages means nothing more than a screenshot of the conversation, which has been shared by the recipient or someone else from his phone. Here WhatsApp states in the subtitle of its Privacy Policy called Third Party Information that you should keep in mind that any user can take a screenshot of your message or conversation, or record your call and send it to WhatsApp You can send it to someone else or post it on any other platform.

It is also possible by cloning the phone
Recently, in the case of Riya Chakraborty and Aryan Khan, Indian law enforcement officers were able to access their conversations with each other through their phones. The leak here was in fact investigators handing over their phones, after which investigators were able to retrieve deleted conversations on their phones and see them. But there is also a technical back door through which private WhatsApp conversations can be accessed. This can be done by cloning the phone, as the name suggests, in this medium, by creating an exact copy of any phone, that is, by cloning it, all the content present in that phone can be copied.

Then spyware can also be secretly inserted (installed) in the phone, through which all the activities related to the said phone can be continuously monitored. Pegasus spyware was developed by an Israeli company that can access WhatsApp conversations.

But the most common way to access WhatsApp conversations is by backing up conversations in the WhatsApp Store in the cloud. WhatsApp itself no longer provides cloud storage and backup of messages with third parties such as Google Drive or iCloud. Storage in the cloud is not encrypted. And if the user’s cloud storage is hacked, the backup of his conversations can be accessed. However, in September Facebook founder Mark Zuckerberg said that another layer of security is being added to WhatsApp that will provide end-to-end encryption to people who choose Google Drive or iCloud as a backup.

Is there any data that can be accessed by WhatsApp?
There is a constant tussle between law enforcement agencies and WhatsApp regarding this issue. While agencies say that it facilitates investigation of cases and crime can be curbed and controlled in time, WhatsApp believes that it will compromise the privacy and security of users.

It is true that WhatsApp does not store any transaction logs after the message has been delivered or any kind of it, but this does not mean that WhatsApp cannot access the messages of its users. In accordance with their privacy policy, if it is believed that thisUser information may be stored, used, protected, or shared if necessary. Circumstances in which this may apply (a) to protect the User (b) to investigate and prevent any illegal activity (c) as a response to legal process or upon official request (d) our Terms and To implement policies. In addition, it may also include information about how some users interact with others through our service.

In September, a report by Pro Publica has questioned the privacy policy of WhatsApp. The report states that the company has offices in Texas, Singapore, and Dublin with about 1000 people, whose job is to review the messages of users that the user has flagged (questioned). Not only this, the company states in its privacy policy that when a report is filed, we collect the information of both the reporter and the person against whom the report is made.

The report also mentions metadata that WhatsApp collects, and is not subject to encryption. But still, it contains much information related to the user like location, phone number, etc. It also shares such metadata with law enforcement agencies upon request.

20/02/2021/1:02:pm
Mumbai: Film actor Vivek Oberoi was penalized Rs 500 by the Mumbai traffic police after he shared a video of himself riding a motorcycle...

05/09/2021/1:57:pm
Sacramento: Cases of coronavirus infection (Covid-19) are increasing wildly in the US state of California and almost all beds in the intensive care rooms...