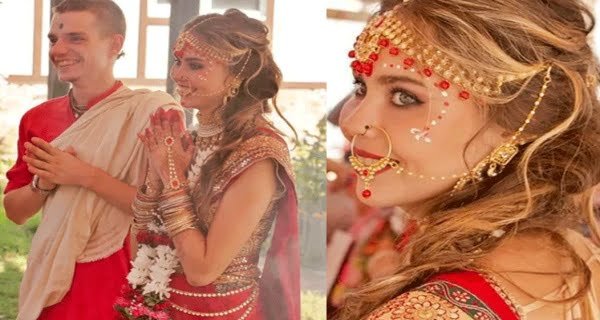 New Delhi: We all know that Indian customs and traditions are very ancient. An Indian marriage is very different from the rest of the world’s marriages. There are many such rituals in Indian marriage, after seeing which people from all over the world are attracted and try to adopt it. That’s why often we see that people abroad also want to get married according to Indian traditions. Recently one such video has surfaced on social media which will make you feel even more proud to be an Indian.

The traditional wedding of India
There are many specialties in Indian weddings. The marriage did according to Hindu traditions also has different meanings. During the wedding, all the prevalent customs are followed, including the text read by the pandit in front of the Yagya, vermilion commentary, seven rounds in the mandap. There are many such words and stories in these customs, after knowing the meaning of which people get mesmerized.

Marriage of foreigners according to Indian tradition
Our country is full of antiquity where each and every custom has a unique significance. When people from abroad can understand the real meaning of Indian traditions, they are very attracted. The curiosity about this increases among foreigners. In such a situation, something similar was seen in the video going viral on social media.

Let us tell you that Russian woman Siamik has posted many videos and photos of her wedding on her Instagram account. In this video, you will see that the partner she is marrying is doing it according to Indian traditions and both of them are looking very excited about their Indian marriage.

The foreign bride dressed in desi style
In fact, Siamese is heavily influenced by Indian culture. So she wanted to get married according to Hindu customs and she fulfilled this dream. Siamik has posted many photos on his Instagram account. Not only this, but she has also made a highlight of many photos and videos. In which it can be seen that according to Indian customs, the Siamese have dressed like a bride. He has got mehndi in his hands and is wearing Indian traditional clothes during the rounds. She seems very happy with this marriage.

Siamik is a social media star
Let us tell you that Siamik has a tremendous fan following on social media. Siamak has 16.4K followers on Instagram and is often active. She is very happy to marry her life partner. Sitting in the pavilion, she is happily following the customs with her life partner. After watching this viral video, the beauty of your face will increase.

Millions of people watched the wedding video
Let us tell you that as soon as this video was uploaded on Instagram by an account named Viti Wedding, people liked it a lot. About 4 thousand people liked this video, while it has been seen about one lakh times.

Covid-19 transition cases in the US exceed 11 million, announced closure

Drug mafia whose lakhs of rupees were eaten by termites every year, read unheard...

20/10/2020/9:35:pm
Indore: The Municipal Corporation on Tuesday launched a new song for the fifth time in the cleanliness survey, in the voice of famous singer...

Microsoft launched Windows 365, Windows OS will run on any device