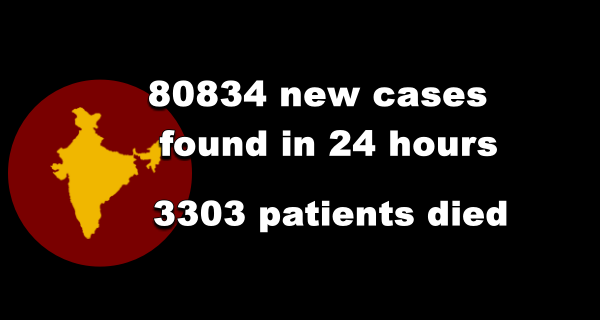 New Delhi: The speed of corona infection has become very weak now. Till a few days ago, more than 4 lakh corona cases coming every day are now going to reach below 80 thousand. For the last 6 days, the corona cases are coming down below 1 lakh which is a sign of relief. According to the Health Department, 80 thousand 834 new cases of corona infection have been reported in the country in the last 24 hours, while 3303 patients have lost their lives. According to the data of the Health Department, after the arrival of new cases of the corona, now the total number of infected patients in the country has increased to 2 crores 94 lakh 39 thousand 989.

According to the Ministry of Health, so far there are 10 lakh 26 thousand 159 active cases from corona in the country, while 2 crores 80 lakh 43 thousand 446 people have recovered and gone to their homes. So far 3 lakh 70 thousand 384 people have died due to corona in the country. There seems to be a big relief from Corona in Maharashtra.
.
10,697 new cases of Covid-19 have been reported in Maharashtra. According to the Health Department, after 10,697 new cases of Covid-19 were reported in Maharashtra on Saturday, the total number of infected people has increased to 58,98,550. The Health Department said that 360 people died due to infection during the day, after which the total number of dead has increased to 1,08,333. At the same time, after 14,910 patients became infection-free, the total number of healthy people increased to 56,31,767.

490 new cases of the corona were reported in Gujarat
490 new cases of Covid-19 have been reported in Gujarat on Saturday, after which the total number of infected people increased to 8,19,866. At the same time, at least 1,278 patients have been discharged from the hospital after becoming infected free and with this 7,99,012 patients have become healthy so far. The Health Department official said that after the death of six more people, the death toll increased to 9,991. He said that 10,863 patients are now undergoing treatment in the state, out of which 272 patients are in critical condition.

Man Sleeps For 300 Days A Year, Dubbed As Real-Life Kumbhakarna

14/07/2021/11:01:pm
Nagaur: A 42-year-old man from western Rajasthan’s Nagaur district has been dubbed as the real-life Kumbhakarna, the mythological character in the epic Ramayana known...