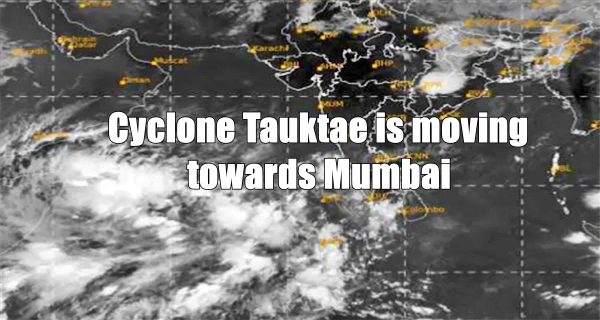 Mumbai: Cyclone Tauktae rising in the Arabian Sea has increased the danger in many areas of the country. It is reported that Cyclone Tauktae is moving towards Mumbai at a speed of about 18 kilometers per hour. According to a report, Toute is said to be about 200 km from Mumbai and 400 km from Gujarat. Three teams of NDRF have been deployed in Mumbai and 12 teams across Maharashtra to deal with the storm.

High alert issued
A high alert has been issued from Maharashtra-Gujarat to Karnataka-Tamil Nadu (Karnatka-TamilNadu) due to the ‘Tauktae’ storm. On the other hand, according to some advisories issued by the India Meteorological Department (IMD) and these coastal areas, the area of ​​the South Arabian Sea and Lakshadweep has become a zone of pressure on Thursday. An IMD report earlier said that it would turn into a zone of deep pressure in the same region by Saturday morning and then take the form of a cyclonic storm over the next 24 hours, that is, Sunday and Monday.

Advice to fishermen not to go to sea
Officials of the Brihanmumbai Municipal Corporation have decided to postpone the corona vaccination campaign for the next two days in view of the warning of cyclonic storm ‘Taukate’ in Maharashtra’s capital Mumbai. Now high waves also arose in the sea and fishermen were advised not to go to sea.

It is raining in Mumbai
In Mumbai, there are strong winds with continuous light rain. Talking about the weather forecast, heavy to very heavy rainfall may occur at the northern cost of Karnataka, Goa, Maharashtra coast and parts of central Maharashtra. At the same time, light to moderate rains with isolated light rains may occur at isolated places over Kerala, interior Karnataka and southern coast of Karnataka.

Do not allow people of Myanmar to enter country, nor set up refugee camp,...