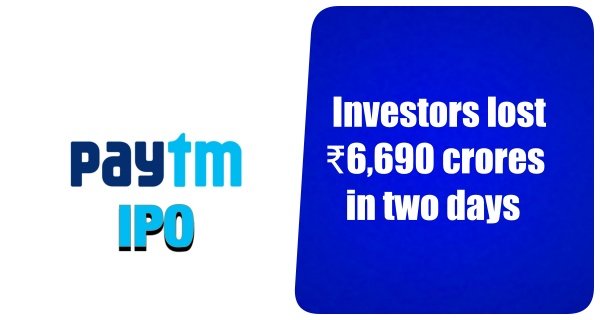 New Delhi: Shares of Paytm’s parent company One97 Communications Ltd continued to decline on the second day of listing. However, on Tuesday, there is a slight buying in the company’s stock. Today the company’s stock is trading at Rs 1434 on BSE.

According to a report by Wall Street General, nearly $900 million (Rs 6690 crore) of investors who invested in Paytm’s IPO have sunk in these two days.

This is the biggest IPO ever
Paytm launched its IPO in the same month, which is India’s biggest IPO to date. Although its listing was very poor. Amid heavy selling pressure, the shares of Paytm fell 12.74 percent on the NSE on Monday to close at Rs 1,362.00. This was about 37% less than its issue price.

The shares of Paytm, which provide from mobile payment to financial services, were listed in the stock market on Thursday last week. It was an IPO of about Rs 1800 crore, which is India’s biggest IPO to date. Paytm’s IPO was awaited for a long time. The investors of this company include Japanese investment firm SoftBank Group, Warren Buffett’s Berkshire Hathaway, and Chinese financial technology company Ant Group.

Know where the mistake happened?
Prashant Gokhale, the co-founder of Hong Kong-based research firm Aletheia Capital Ltd, said, “It is clear that its price was kept high. It is difficult to tell from the outside what led to the wrong pricing, but it seems that the company’s desire to launch its biggest IPO has driven its valuation higher.”
“The business fundamentals of the company are weak, but the price has been fixed keeping in mind the ideal situation,” he said. Gokhale said, “The biggest challenge before Paytm is that they have a huge customer base, but they have to think about how to make money from it as there is no charge for making payments. With the advent of the UPI revolution, this challenge has become even bigger.”

15/06/2020/11:24:am
Paris: French President Emmanuel Macron has announced that France is fully reopening its economy, including all restaurants, to accelerate the country's recovery after virus...