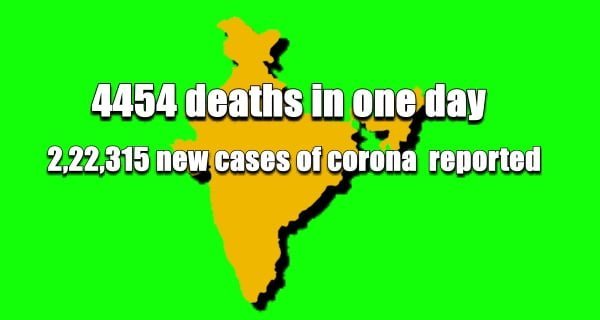 New Delhi: The country has started getting relief from the second wave of Corona (COVID-19 2nd Wave). The frightening figures of Corona at the beginning of May are now beginning to fall at the end of the month. Even though the graph of patients infected with a corona in the country is going down fast, the risk has still not reduced. According to the Health Ministry data, 2,22,315 new cases of corona have been reported inside the country in the last 24 hours, while 4454 patients have died. After the arrival of new cases of the corona, the total number of infected patients in the country has increased to 2 crores 67 lakh 52 thousand 447.

The total number of infected people has increased to 55,79,897 after 26,672 new cases of coronavirus infection were reported in Maharashtra on Sunday. With this, with the death of 594 patients, the figure of the dead has reached 88,620. During this time, 29,177 more people have recovered from the infection. According to the Health Department, the total number of people who have recovered from infections in Maharashtra has now gone up to 51,40,272. The number of under-treated patients in the state is 3,48,395.

2242 new cases of Corona in Telangana surfaced
The total number of infected people has increased to more than 5.53 lakhs after the arrival of 2242 new cases of Coronavirus infection in Telangana on Sunday. According to the Health Department, the number of dead has reached 3,125 with the death of 19 patients. According to the department, the maximum number of 343 new cases came from Brihat Hyderabad Municipal Corporation, while 174 and 165 new patients were detected in Rangareddy and Karimnagar respectively.

ICC approves replacements in test cricket, bans use of saliva to shine ball

16/06/2020/10:28:pm
International Cricket Council, ICC on Tuesday has approved substitution in case a player shows symptoms of COVID-19 during a Test match besides ratifying the...

06/02/2021/10:25:pm
Washington: The White House said on Friday that the Joe Biden Administration believes that there is a strategic competition between the United States and...

IIM professors will teach time management to teachers of schools

10/09/2020/11:56:pm
Indore/Bhopal: Corona epidemic has increased stress among people. This problem is being seen in teachers and students also. IIM (Indian Institute of Management) has...