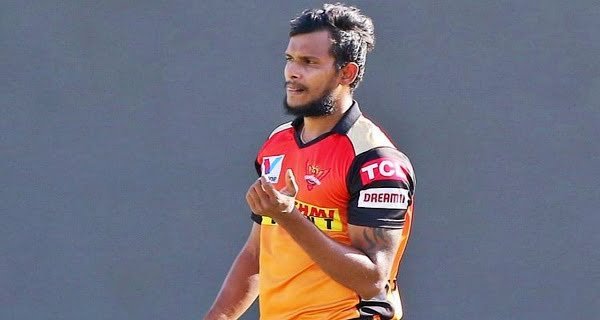 New Delhi: Before the match against Delhi Capitals, a player of Sunrisers Hyderabad has been found to be Corona positive. The 33rd match of IPL is to be played between Delhi and Hyderabad (DC vs SRH) in Dubai from 7.30 pm today. According to the BCCI press release, the team’s fast bowler T Natarajan has turned out to be Corona positive in the RT-PCR test. He has been isolated from the rest of the team. Six members of Hyderabad who came in close contact with Natarajan have also been kept in isolation.

Natarajan was in contact with all-rounder Vijay Shankar, team manager Vijay Kumar, physiotherapist Shyam Sundarji, Dr. Anjana Vanan, logistics manager Tushar Khedkar, and net bowler Periyas Ganesan. The rest of the team, including the members who came in close contact with Natarajan, were today tested for RT-PCR, which came back negative. Tonight’s match between Sunrisers Hyderabad and Delhi Capitals will be held at the Dubai International Cricket Stadium. BCCI has confirmed this. The IPL, which was halted in May after several Covid-19 positive cases were reported in the bio-bubble in India, has resumed in the UAE from Sunday (September 19).

In the bowling, he will be led by Rashid Khan and Bhuvneshwar Kumar who will have to show discipline to check the Delhi batsmen at the Dubai International Stadium. Delhi is currently in second place with 12 points from eight matches while Sunrisers have only two points from seven matches and are at the bottom. Sunrisers have won only one match so far.

The two teams are as follows:

10/07/2021/10:37:am
New Delhi: The Indian version of PUBG Mobile India, Battlegrounds Mobile India, has been officially launched in India on July 2. This beef has...

Now in Dubai, if you dry clothes on balcony, you will get a heavy...

29/12/2021/9:34:am
Dubai: Some new rules have been made in Dubai, violation of which (Dubai Municipality Advisory) can lead to heavy fines. Drying clothes on the...

Yellow alert for prevention of corona in Delhi, know what will remain closed

28/12/2021/9:20:pm
New Delhi: Omicron is continuously spreading its feet in the country. Delhi-Maharashtra is at the top in the case of Omicron cases. In such...