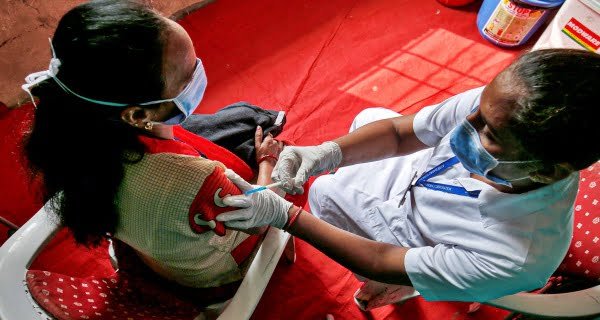 New Delhi: The time spent on Saturday was very important for the countrymen of India. Significantly, for the last 10 months, a strong campaign to end the worldwide corona epidemic (Corona Virus Pandemic) has started. The beginning of which was done by applying the vaccine to health workers last Saturday. About 1,91,181 health workers were vaccinated on the first day of the campaign. This information was given by the Union Ministry of Health. There have been 52 cases of side effects of the corona vaccine in the capital of Delhi.

Here, cases of mild adverse effects of the vaccine are now seen mostly in South Delhi and South West Delhi. At present, 11 such cases have been reported in both areas. On the other hand, according to NDMC, two health workers of Charaka Palika Hospital have also seen mild side effects of Corona Vaccine. Both of them felt tightness in the chest. Both were placed under the supervision of the AEFI team. He was also discharged after half an hour of feeling normal.

According to the Health Ministry, there were some delays in updating the list of beneficiaries on the first day of the Corona Vaccination Drive. Apart from this, vaccines have also been provided to many health workers who were not enrolled for Saturday’s session. Both cases have now been diagnosed. In this case, there have been 52 cases of side effects of the Corona vaccine in the capital Delhi. One person has to be hospitalized. On the first day of the vaccination campaign in Delhi, 4319 health workers have been vaccinated.

Earlier, after the first day of the vaccination campaign ended, the Health Ministry said in a press conference that, “The first day of the Corona vaccination campaign has been a success. About 1,91,181 health workers were vaccinated during this period. So far there is no case of hospitalization after vaccination. ” Along with this, the Ministry of Health stated that, “Covieshield of Serum Institute (SII) was supplied to all the States / Union Territories. On the other hand, Bharat Biotech was supplied COVAXIN to 12 states. A total of 3351 sessions were conducted across the country with both vaccines. “

13/09/2020
New Delhi: Congress Party's interim president and UPA chairperson Sonia Gandhi has gone abroad for two weeks for a health check-up. According to the...

29/11/2020
Raipur: An Assistant Commandant of the Central Reserve Police Force (CRPF) has been killed and seven others injured in a landmine blast in the...