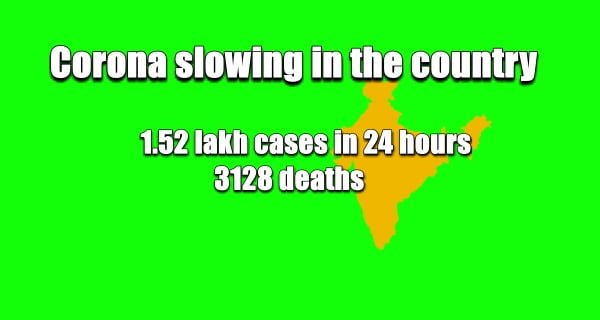 New Delhi: The second wave of Corona in the country is now seen to be weakening. The decreasing cases of Corona are giving relief to the people. Although the death toll from corona has still not decreased, the number of patients infected with corona is visible. According to the Ministry of Health data, 1 lakh 52 thousand 734 new cases of corona have been reported in the country in the last 24 hours, while 3 thousand 128 patients have lost their lives during this period. Last day, 2 lakh 38 thousand people have also recovered from Corona. After the arrival of new cases of the corona, now the total number of infected patients in the country has gone up to 2 crores 80 lakh 47 thousand 534.

According to the Ministry of Health, there are 20 lakh 26 thousand 92 active cases from Corona in the country so far, while 2 crore 56 lakh 92 thousand 342 people have recovered and gone to their homes. So far, 3 lakh 29 thousand 100 people have died in the country from Corona. Maharashtra, which is most affected by the corona, is also seen getting relief from the corona.

Covid is decreasing in Maharashtra:

India at number three in terms of the death of Corona
In the case of Corona’s death, India is at number three, the maximum number of deaths from Corona has gone to America. India is second in the world in the active case. That is, India is the second country where most people are infected with corona right now. The death rate of corona in the country is 1.16 percent while the recovery rate is more than 90 percent. Active cases have come down to less than 8 percent.

17.10 crore cases so far
So far, more than 171 million people of corona in the world have been infected with the coronavirus. Of these, more than 35.56 lakh people have died, while 15.32 crore people have beaten Corona. At present, 1.43 crore people are undergoing treatment.

Comparing India with other countries on the present condition of Corona, America is ahead of India in this total number of patients. In the US, the total number of corona patients is 34,043,068, while in India, 2,78,94,800 people have fallen victim to corona so far. After India, Brazil is at number three, where 16,515,120 people have been hit by Corona so far.

16/10/2020/10:58:pm
Lucknow: The Yogi government is constantly under attack from the opposition for the increasing crime against women and the law and order situation in...

Big news about the travel of common people in Mumbai local amid unlock in...

08/06/2021/10:18:am
Mumbai: Unlock has started due to fewer cases of Coronavirus Pandemic in Maharashtra. Everything is slowly opening up in the state. Along with this,...

26/03/2021/8:53:pm
Beijing: Diplomats were briefed on Friday before the release of the much-awaited World Health Organization (WHO) report related to the origins of Covid-19 by...