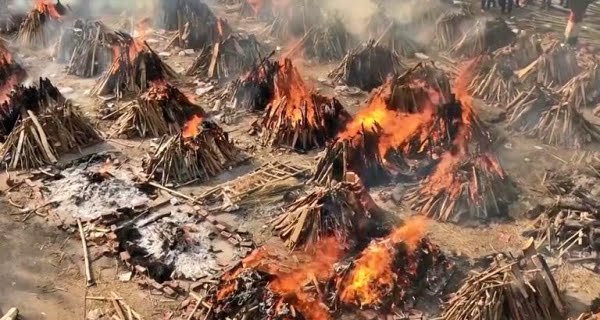 New Delhi: While 2.69 crore people have been officially infected with Corona in India so far, 3.07 lakh people have died from it so far. But the downside to these figures is that they do not show the true picture of the epidemic. In fact, the WHO estimates that the number of deaths due to corona in the world maybe 2 to 3 times higher than the official number. But it is likely to be even more likely to officially report fewer deaths in India.

On this issue, Kayoka Shioda, an epidemiologist at Emory University, says that in India, where hospitals are full of corona patients. While many deaths are happening at home, especially in rural areas. But all these deaths go beyond the official figures. India currently lacks such labs, which can confirm the exact cause of death. However, even before the corona, four out of every five deaths in India were not medically examined.

The New York Times, on the other hand, sought the opinion of more than a dozen experts to estimate the exact number of deaths in India. These eminent epistemologists divided the epidemic in India into three conditions- general condition, bad condition and extremely bad condition. According to the report, even in the most normal situation, the number of infections and deaths is many times higher than the government figures at the moment.

Estimation of correct statistics under normal conditions:
Based on the Best Case Scenario, these experts estimated that the corona infection would have spread 15 times more than the official figures. The death rate from infection was also considered to be 0.15%. Death figures on this basis could be double the reported figures. On this basis, these people estimated that 40.42 crore people in the country have been infected with this terrible infection and it may have killed 6 lakh people, but the official figures of India say something else.

Estimation of correct statistics in a bad situation:
Now if a reported case in India spreads the infection to 20 people and the death rate is 0.30%, then the death toll from corona in India should be 5 times higher than the official number. On this, the director of the Center for Disease Dynamics, Dr. Ramanan Laxminarayanan said that the number of infections and deaths in India is very low. According to him, in order to reach this possible situation, the data obtained from three different sources has been thoroughly analyzed. It has revealed that about 50-60 crore people have been infected.

Estimation of correct statistics in extremely poor conditions:
Now for this condition, the expert has estimated 26 times more infection in this situation than in the reported case. The death rate from infection is now estimated at 0.60%. Explain that these estimates have been made at the moment considering the second wave of Corona and the crumbling health system of the country. It is estimated that 700 million people have been infected and about 42 lakh people have died in this assessment, but the official figures for India are quite the opposite.

Estimated Result Based on 3 Nationwide Serosurvey:

Data from three serosurveys have now been used to estimate the exact number of corona infections and deaths in India. These surveys have been conducted all over the country at different times. Anyone who is infected with the corona makes a kind of antibody to fight it in their body. The same antibody is tested in cirrhosis. On this issue, Dan Weinberger, an associate professor at the Yale School of Public Health, said that the serosurvey also has its limitations, but at the moment it is the most appropriate data to count actual death figures.

About 50% of India population may have corona by now:
Here, during this complex coronal period, India conducted three consecutive CERO surveys. In all three, it was found that the number of people actually infected was much higher than the confirmed cases of the corona. The results of this survey said that the actual number of people infected with a corona in India is said to be actual number About 13.5 to 28.5 times more. Significantly, these figures are only up to the time when the survey was conducted. However, even after this survey, the transition in India continued. If such cases have been increasing according to the time of the survey, then it can be said that about 50% of the population of India was affected by corona.

On this theory, Dr. Shioda says the number of sero surveys conducted in India may have been lower than in the actual cases, as it is difficult to know whether the person had the infection months after the antibody was made. Therefore, in this survey, it cannot be accurately guessed whether a particular person was ever infected with corona or not. In such a case, the number of cases will be even more than the number mentioned in the CERO survey.

Whatever the case may be, the New York Times report is an approximate report, but there is no denying that there is probably some consensus on the death toll from corona in India, at least in the country. This is what the heart of a living person says.

19/08/2020/9:05:pm
New Delhi: The Supreme Court on Wednesday said that the legitimacy of the investigation into the unnatural death of actor Sushant Singh Rajput is...