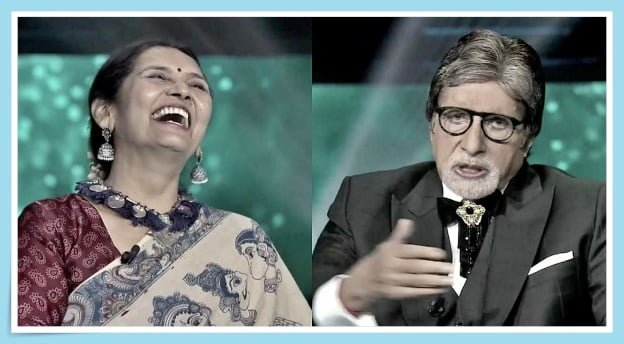 Mumbai: Bollywood actor Amitabh Bachchan is in constant headlines these days for his show Kaun Banega Crorepati 13 (KBC 13). Recently, on the occasion of the Ganesh Chaturthi festival, Deepika Padukone and Farah Khan were seen in this Friday’s Glorious Friday episode. Amitabh has a lot of fun with all the contestants who come to this show.

Actually recently Sony Entertainment has shared a new promo on its social media account. In this promo, Amitabh is praising Contestant Namrata Shah’s necklace. After which Amitabh and Namrata start flirting. Then Amitabh says to the producer in fun, “Producer Ji, stop this program, I want to go to have tea with Namrata Ji.”

With this, another promo is going viral. Apart from Namrata, two more contestants are seen in this promo. In this promo, Namrata is seen dancing fiercely in front of Amitabh Bachchan. In this promo, Amitabh asks him, ‘You have to roam so often, you do not get dizzy.’ On this, Namrata says, ‘If the eyes are fixed at one place, then the dizziness never comes.’

Efforts are being made to destabilize Russia: Vladimir Putin

‘Black Boxes’ Mandatory for all Cars in Europe from 2022, Here’s What They...

06/10/2020/9:44:am
Tokyo: The Foreign Minister of the Quad Group will discuss China's aggression in a meeting to be held in Tokyo on Tuesday. This quadrilateral...