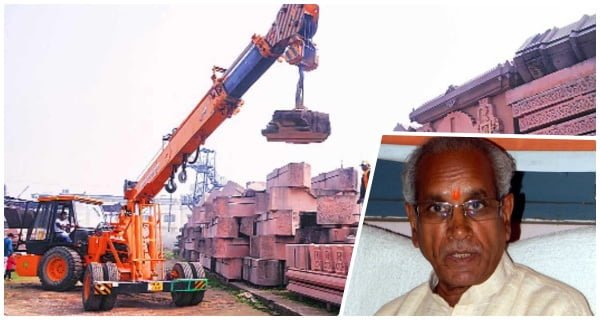 Ayodhya: The work of construction of Ram Janmabhoomi temple is going on a twice as fast day and night. The construction of the Ram Janmabhoomi temple from Corona was not interrupted whereas, due to Corona, all the problems arose in the entire country. The time limit has been fixed to fill the foundation for the construction of the temple and work is being done in 2 shifts to complete it on time. Two shifts of 12-12 hours each are being done by the working organization so that the work can be completed on time.

Vastu Dosh was eliminated
For the construction of the temple of Ramlala, more land was required to straighten the perkota to eliminate the Vaastu Dosha. In the same order, the trust of two temples, Ram and Kaushalya Bhawan, adjoining the Ram Janmabhoomi, made a deed. To fill the foundation of the temple of Ramlala, it is taking 4 to 5 days to lay a layer thick and then compact it. The trust claims that by the month of October, the excavated site will be filled for 400 feet long, 300 feet wide, and 50 feet deep foundation.

4 Layers Completed So Far
Champat Rai, General Secretary of Shri Ram Janmabhoomi Teerth Kshetra Trust informed that about 120000 cubic meters of debris were removed from an area 400 feet long, 300 feet wide, and 50 feet deep, which is being filled. It takes 4 to 5 days to lay a one-foot-thick layer and compact it on a roller. The 4 layers have been completed in the Ram Janmabhoomi complex so far, after two to three hours of torrential rains, the construction work of the temple stops one day. There is a period of two months and it is expected that the work will be completed by the end of October.

Corona did not affect work
Champat Rai said that to clear the architectural defects of the temple construction, the land was required to straighten the perimeter of the temple, which has been almost completed after the fire Ram and Kaushalya Bhavan has been taken over. The corner of the park is yet to be straightened on the west side. The shadow of Corona has not fallen on the process of temple construction. The general secretary of the trust said that the laborers are doing the work of God and that is why all are safe.

12/07/2020/12:45:pm
Mumbai: The whole country is struggling with the havoc of the Coronavirus. At the same time, after the news of Amitabh Bachchan being corona...

27/01/2021/9:41:pm
Washington: The Corona Pandemic has shaken the whole world. The figure of this deadly disease, which started a year ago, has crossed 10 crores...

Government will provide cheaper options than gas for cooking, know what is the plan?

14/09/2020/10:58:am
New Delhi: Power Minister RK Singh said that the government is considering encouraging the use of electricity on a wider scale in cooking to...