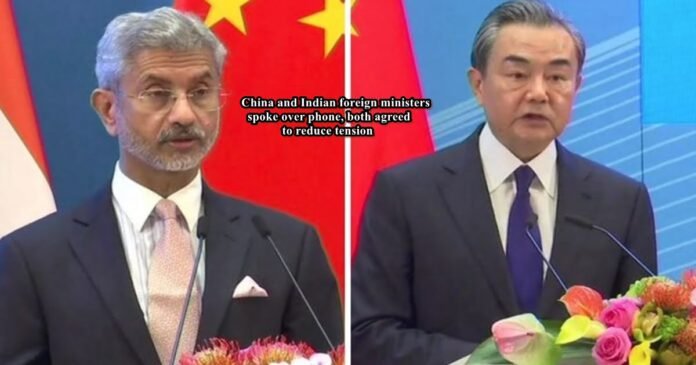 Beijing: Chinese Foreign Minister Wang Yi spoke to Foreign Minister S Jaishankar over phone and the two leaders agreed to calm the tense situation as soon as possible and maintain peace and tranquility in the border area in line with the agreement between the two countries. This information was given in an official statement here. The two ministers have a telephone conversation after 20 Indian soldiers were killed in violent clashes with Chinese troops on Monday night in East Ladakh’s Galwan Valley. It is being described as the biggest military skirmish between the two countries in the last five decades. In a statement in New Delhi, the Ministry of External Affairs said that in a telephone conversation Jaishankar expressed strong opposition to India in strong words on violent clashes with Wang and said the unprecedented developments would have serious implications on bilateral relations.

He asked the Chinese side to re-evaluate its activities and take corrective steps. Jaishankar told Wang, “The Chinese side acted in a pre-planned and planned manner which was directly responsible for the violence and casualties of the soldiers.” In these, the intention is to change the facts on the ground in violation of all our agreements not to change the status quo. ” According to a statement by China’s Foreign Ministry, the two sides will deal with the serious situation caused by the skirmish in the Galvan Valley, on joint consensus of consensus in military level meetings between the two sides, as soon as possible on the ground. It agreed to calm the situation and maintain peace and tranquility in the border area as per the agreement reached between the two countries so far. According to the statement, Wang said that the two sides should abide by the important consensus between the leaders of the two countries and strengthen communication and coordination to properly handle the border situation through the existing channels so that the border area is united. To maintain peace and tranquility. India said on Tuesday that the violent clash between Indian and Chinese forces in eastern Ladakh was the result of the Chinese side’s attempt to unilaterally change the status quo in the region.

The Foreign Ministry said that there were casualties on both sides and this situation could have been avoided if the Chinese side had faithfully followed the earlier agreement at a higher level. According to a press release by China’s Foreign Ministry, “Wang urged that India should conduct a thorough investigation into the June 15 border clash and punish those responsible for the incident.” “They demanded strict control of the frontline personnel and immediately stopped all provocative actions so that such incidents do not recur,” the release said. “The Indian side should stop miscalculating the current situation and should not underestimate China’s determination to preserve regional sovereignty,” the statement quoted the Chinese Foreign Minister as saying. Wang emphasized that both China and India are emerging superpowers with a population of more than one billion and that our historic mission is to “accelerate our own development and revival”. He said that for this reason mutual respect and support is the right direction for both sides which is in the long-term interest of both countries. “Mutual skepticism and mutual confrontation are the wrong ways and are contrary to the basic aspirations of both sides,” Wang said. The Chinese foreign minister also alleged that India’s frontline border troops violated the military-led “consensus” between the two sides. He claimed that as the situation calmed down in the Galvan Valley, he “once again crossed the LAC and deliberately instigated the officers and jawans and carried out violent attacks” who negotiated on the spot. Wang said that “for this reason, the skirmishes started and the casualties occurred.” Wang said that “this dangerous act of the Indian Army has seriously violated the agreement between the two countries on the boundary issue and the fundamental rules of international relations.”

08/06/2021/1:18:pm
New Delhi: In view of Coronavirus infection, most countries including India have banned international flights. However, there are some countries that are now removing...

Bill Gates’s warning – after Corona, two more things can cause massive destruction in...

08/02/2021/10:11:pm
New York: Microsoft founder Bill Gates has warned the world about two more threats. He has said that in the coming days, climate change...